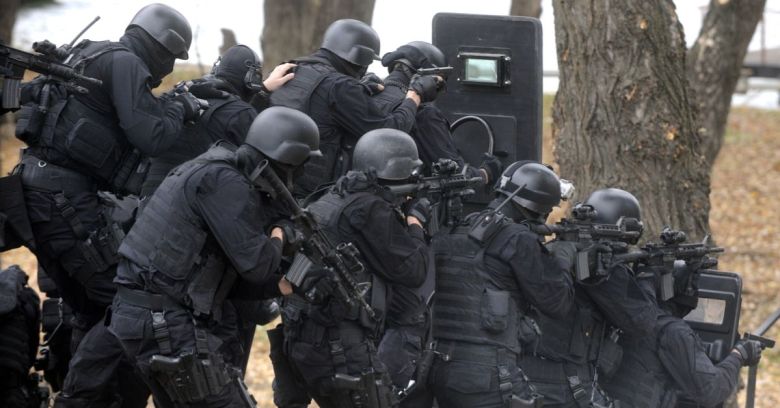 Tyler Rai Barriss – the 25-year-old man from southern California who SWATted an innocent man who was killed in a subsequent police shooting – will plead guilty to 46 new federal charges, according to local news outlets in Kansas, where victim Andrew Finch lived and where Barriss is in prison.

A federal indictment unsealed on Wednesday also names two other men who were allegedly involved in the fatal SWATting incident: Casey Viner, of Ohio, and Shane Gaskill, of Wichita, Kansas. Both have been charged and have pleaded not guilty to multiple charges.

According to prosecutors, Gaskill was the intended victim of the SWAT, which grew out of a Call of Duty game in which two teammates were disputing a $1.50 wager. Apparently, one had accidentally “killed” a teammate in the first-person shooter game.

According to court documents, Gaskill at one point saw that Barriss (@SWAuTistic) was following him on Twitter, so he allegedly gave him what turned out to be a former address – a house that he owned and which Finch was renting – and taunted Barriss to go ahead with the SWAT.

What @SWAuTistic is pleading guilty to

In the recording of the emergency call that cost Finch his life, a man said he’d shot his father in the head. The caller also said he was holding his mother and a sibling at gunpoint in a closet. He said he’d poured gasoline all over the house and that he was thinking of lighting the house on fire and committing suicide.

Police surrounded Finch’s Wichita home, prepared to deal with a hostage situation. Finch, curious about the flashing police lights outside, went to the door. He then followed police instructions to put up his hands and move slowly. But at some point, authorities said, Finch appeared to be moving his hand toward his waistband as if he was going to pull out a gun.

Barriss was arrested in December 2017, charged a month later, expressed barely tepid remorse that veered off into

… and allegedly took advantage of a buggy inmate kiosk a few months after that in order to call himself an eGod and Tweet more threats to “SWAT someone’s ass”.

@SWAuTistic – one of Barriss’s alleged aliases – claimed credit for placing dozens of these calls, calling in bogus hostage situations and bomb threats at roughly 100 schools and at least 10 residences. He also claimed responsibility for bomb threats against a high school in Florida and a bomb threat that interrupted the net neutrality vote.

He was also reportedly responsible for evacuations over a bomb hoax call at the Call of Duty World League Dallas Open in December 2017.

Barriss has also been charged with calling in bomb threats at government buildings in Washington, DC, including the headquarters of the FBI and the Federal Communications Commission (FCC).

According to the new charges, Barriss made dozens of hoax threats between September 2014 and December 2017 to places around the country, including that he had shot people at homes; planted bombs at Harvard University, a shopping center, schools and other buildings; and that he had planted bombs in a high school and a movie theater and was outside each armed with a gun.

The long list of charges includes bank fraud: one such alleges that Barriss and a co-conspirator used someone else’s credit and debit card to purchase a NASA hat, a belt and shoes. He’s also been charged with involuntary manslaughter, making false/hoax reports to emergency services, cyberstalking, making interstate threats, making interstate threats to harm by fire, wire fraud, and conspiracy to make false/hoax reports.

His trial was originally set for 1 October, but his defense attorney said he needed more time to prepare. His new trial date is 7 January 2019.