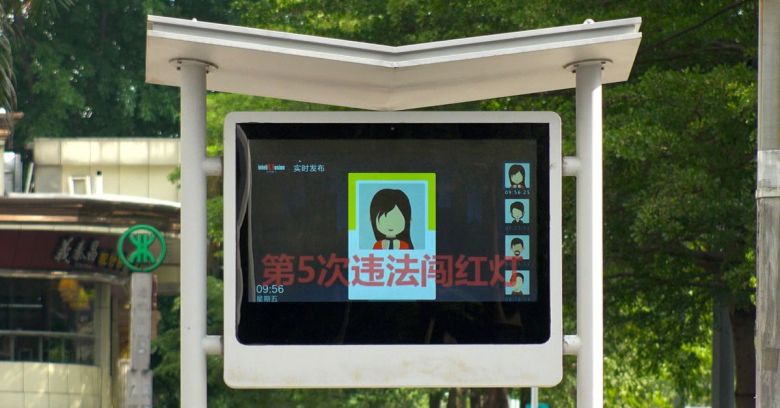 It is said of Dong Mingzhu, known as China’s most successful businesswoman, that wherever the driven, I-haven’t-taken-a-day-off-in-27-years Queen of Air Conditioning walks, no grass grows.

Yeah, well, forget about the grass: she’s a scofflaw JAYWALKER!!!

That, at any rate, was the erroneous conclusion arrived at recently by a facial recognition traffic camera that obviously can’t tell an advertisement on a bus from a human face.

Hence was the face of the famous woman known throughout the land as “Sister Dong” splashed onto a huge screen erected along a street in the port city of Ningbo for purposes of naming and shaming jaywalkers. Dong’s photo included a line of text saying that she’d just broken the law by crossing the street against a red light.

The South China Morning Post (SCMP) reported that the surveillance system captured Dong’s image on Wednesday from an advertisement on the side of a moving bus.

“Whoops,” said Ningbo’s traffic police. That same day, they wrote in a post on Sina Weibo that it had been a mistake, that the surveillance system had since been “completely upgraded,” and that Dong’s photo had been deleted. From a Google translation of the post:

The portraits on the bus body advertisements traveling south to north were misidentified, and the traffic police department immediately deleted them afterwards. At present, the technicians have completely upgraded the system to reduce the false recognition rate.

Some Chinese cities have been using these AI-backed facial recognition systems to name and shame jaywalkers for months now.

Shenzhen traffic police announced in February that some 13,930 jaywalkers had been recorded and displayed at just one busy intersection in the prior 10 months.

According to NextShark, the system works with a camera that’s triggered whenever somebody enters the crosswalk during a red light. Shenzhen Traffic Police Technology Department Chief officer Li Qiang told the publication that the camera captures a photo of the jaywalker’s face, then automatically sends it to the LED screen and to a police database for identification.

The system registers how many times a repeat offender has violated traffic rules. After a point, the offender’s social credit score will take a hit. China’s all-encompassing social credit score system is due to be fully up and running by 2020, according to a plan posted on the Beijing municipal government’s website last week.

Repercussions of getting a downgraded social credit score are manifold for Chinese citizens: beyond not being able to get a loan, they include being barred from flights and high-speed trains, having to forego heating subsidies, being denied promotions, and pervasive public shame.

Ms. Dong, however, didn’t hold the mistake against police. Her company, Gree Electric Appliances, issued a statement thanking Ningbo’s traffic police for their hard work and calling on people to obey traffic rules.

At least Dong had a chance to be exonerated. Chinese citizens often don’t even know they’re being surveilled.

States have an obligation to provide their citizens with public security, but not at the expense of fundamental human rights. Much of this technology gathers information about people without their knowledge and consent. They have no way of knowing until it’s somehow being used against them. There is no effective way of pushing back against that.