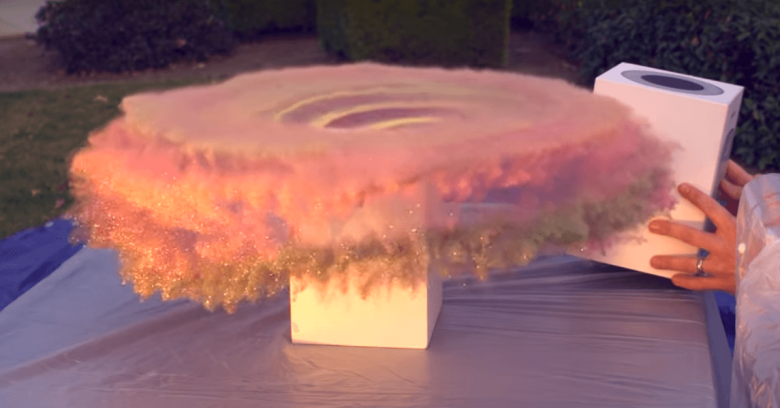 Well, who knew: the sweet smell of success actually smells like farts and is uber fabulously glittery.

That was proved by former NASA engineer Mark Rober, who, in his own words, “over-engineered the crap” out of a glitter bomb to sprinkle glee and regular emissions of aerosolized fart odor upon package thieves…

…and who, in order to record the newly sparkling thieves’ Emmy award-worthy reactions – the majority of which amount to variations on “what the fuuhh…..??!!!” – used an accelerometer in the fake package to detect movement, geofencing to send an alert to his phone when the package left his property, and four camera phones to record visual and audio of the package-nappers.

But enough with blah blah blah. A collection of glitter explosion video captures alone are worth a thousand words, never mind the value of the suspense that mounts at the sound of a motor cranking as the fart smell machinery revs up for its 30-second-interval gusts.

Rober spent nine years working at NASA – mostly on the Curiosity rover – at its Jet Propulsion Laboratory. He’s an engineer (obviously!), an inventor (ditto!), and a YouTube personality. To date, pre-glitter fart bomb, his most popular invention has been Digital Dudz: a selection of Halloween costumes that incorporate mobile apps with clothing.

The glitter fart bomb, however, is his magnum opus, he said.

His muse was a package thief. Two package thieves, to be exact, both of whom had made off with a delivery from his California porch one day in broad daylight, about seven months ago.

In spite of his security camera having picked up the video of the thieves in action, police just shrugged, telling him it wasn’t worth their time to investigate.

So besides feeling violated by the theft, he felt powerless by the shrug. In the YouTube video, which he posted on Monday, Rober said that he “just felt like something needs to be done to take a stand against dishonest punks like this.”

And then I was like, hold up. I built a dart board that moves to get a bulls-eye every time. I spent nine years designing hardware that’s currently roving around on another freakin’ planet. If anyone was going to make a revenge bait package and over-engineer the crap out of it, it was going to be me.

In designing his booby-trap, Rober said he was inspired by his “childhood hero” Kevin McAllister, also known as the young and resourceful protagonist (played by Macaulay Culkin) in the “Home Alone” films of the 1990s.

With the help of friends – one in particular who excelled at working with tiny microelectronics – Rober mocked up a design for his ideal trap. The bomb was disguised as a package – specifically, a cellophane-wrapped Apple HomePod box he knew would be “enticing” for any porch pirate.

Not only was the package GPS-enabled so Rober could track its journey once it left his home perimeter, and not only would it record video with embedded cellphones no matter how the thief picked up the parcel, and not only would its noxious emissions likely prompt the thieves to toss it as soon as possible, but the video would also upload to the cloud: no chance of missing those reaction videos in case a smell-impaired thief realized they were in possession of four phones.

Once triggered, a spinning cup at the top would “celebrate their choice of profession with a cloud of glitter,” Rober said. One pound of glitter, in fact.

It took about six months to engineer and test. After that, it was time to set the trap.

It didn’t take long before a thief picked it up. Rober went and retrieved the discharged package from a parking garage near his house, then rigged it again. Another thief grabbed it, went through the glitter explosion and fart-spray exposure. And then another. And another.

As of Tuesday afternoon, Rober’s video had more than 11 million views, and people were begging to buy one.

Sorry, it’s not for sale, Rober told the Washington Post.

Rather, the point of the video is “to get people pumped about science and engineering and education,” like the others on his YouTube channel, including how to create a “hot tub” of liquid sand, how to skin a watermelon and how to engineer that moving dartboard of his.

Rober said that he hasn’t had any other packages stolen since he sprung the glitter-fart decoy on the parade of thieves. However, he told the Post, six months of testing have left him with a glitter-filled house and workshop.

So at the end of the day, the joke is sort of on me.