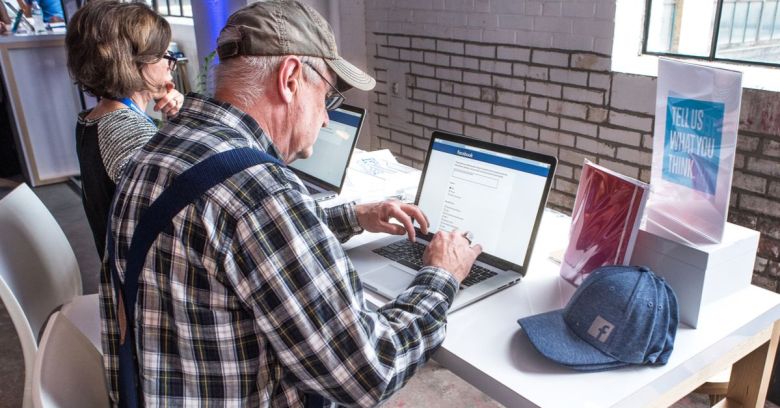 Following the 2016 US presidential campaign, studies have found that conservatives were more likely to share articles from fake-news domains than were moderates or liberals.

But in a new study of misinformation-sharing on social media during the 2016 campaign, published in Science Advances on Wednesday, researchers say that political leaning doesn’t correlate nearly so strongly with fake-news sharing as does age.

Specifically, it’s old people who are sharing the most fake news.

Age, in fact, is the best predictor of how Facebook users interact with fake news, above and beyond sex, race, income, education, or how many links they share, the researchers found.

One silver lining: sharing fake news was “quite rare” during the 2016 campaign, the researchers found:

The vast majority of Facebook users in our data did not share any articles from fake news domains in 2016 at all.

This isn’t because survey respondents didn’t share links in general; it’s just that they overwhelmingly chose not to specifically share fake news. Of their respondents, 3.4% of those who opened up their Facebook profile data to the researchers shared 10 or fewer links of any kind during the period of data collection. Far more – 26.1% – shared 10 to 100 links, and even more  – 61.3% – shared 100 to 1000 links.

Sharing of stories from fake news domains is a much rarer event than sharing links overall.

Across all ages, only 8.5% of study participants shared at least one link from a fake news site.

Their findings did echo those of earlier studies (such as this one) in that conservative respondents were more likely to share articles from fake news-spreading domains.

The researchers noted that this finding goes along with what other studies have surmised: that fake news helped Trump’s candidacy during the 2016 election.

But again, regardless of political leanings, such sharing increases with age, the researchers found.

The researchers suggested that there are a few factors that could help to explain why older people are more likely to share fake news. For one thing, it could be that those who are over the age of 60 don’t have the level of digital media literacy that younger people do. It’s known as the divide between “digital natives” who grew up with technology and the older “digital immigrants” who’ve had to adopt it. Could it be that digital natives have a better ability to recognize and sidestep dubious content than do older users?

Another theory puts it down to cognitive deterioration with age. As memory goes, so too goes the ability to resist “illusions of truth,” according to such theories. Memory decline is just one of the factors cited by the FBI in a page devoted to fraud against seniors. From that page:

When an elderly victim does report the crime, they often make poor witnesses. Con artists know the effects of age on memory, and they are counting on elderly victims not being able to supply enough detailed information to investigators.

The researchers noted that they didn’t rely on users’ self-reporting of their Facebook actions. That’s because self-reported measures of exposure to political media have been shown to be biased, or, in the words of one study, “plagued with error and questions about validity.”

Rather, the New York and Princeton Universities researchers used what they said was a novel new dataset combining survey responses and “digital trace data” that “overcomes well-known biases in sample selection and self-reports of online behavior.”

In plain English, that means that starting in November 2016, they asked respondents to share information from their Facebook profiles via a Facebook web application that enabled respondents to select what type of information they were willing to share: fields from their public profile, including religious and political views; their own timeline posts, including external links; and what pages they followed.

Out of a panel of 3,500 people, about 49% of the study participants who used Facebook agreed to share their profile data.

Researchers could then check links posted to participants’ timelines against a list of web domains known to have historically shared fake news, compiled by BuzzFeed News reporter Craig Silverman. The researchers also cross-referenced those links against other lists of fake news stories and domains to see whether the results would be consistent.

13 comments on “Is fake-news sharing driven by age, not politics?”