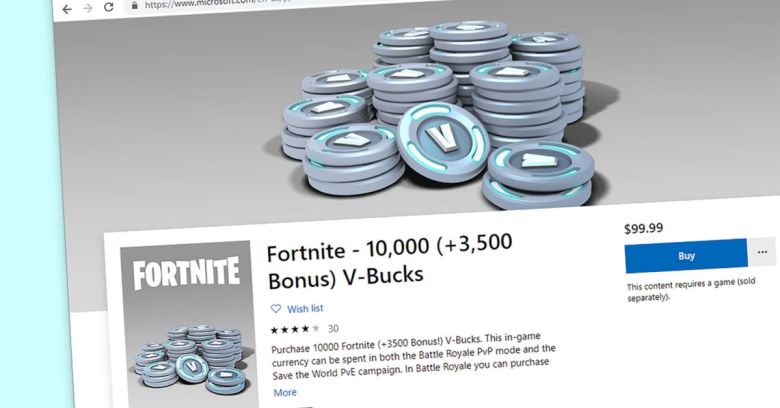 Crooks are laundering money through Fortnite’s in-game currency, known as V-Bucks, according to an investigation carried out by The Independent and cybersecurity firm Sixgill.

They’re using stolen credit cards to purchase V-Bucks, then selling the currency at a discount to players on the Dark Web and thereby cleaning the money.

Why do we keep hearing about yet more scams that revolve around Fortnite? Same reason that robbers rob banks: that’s where the money’s at.

Be they young, old, and/or dressed up in the skin of an anthropomorphic tomato, players worldwide flock to the free Fortnite Battle Royale, to the tune of what its maker, Epic Games, said was more than 125 million players across all platforms as of June 2018.

Before its release, we saw fraudsters exploit gamers’ keen anticipation to get invitations to the release, flogging their fictional “extra free invites!!!” as they looked for profit or for pumped-up Twitter followers/likes/retweets/comments.

Then we saw scammers seed the internet with fake Fortnite apps that never loaded the actual game and instead churned victims through the downloading of other apps that the fraudsters got paid to disseminate.

Then, within a year of its 2017 launch, we saw hijacked Fortnite accounts being hawked on Instagram: what Kotaku called a “booming industry”.

A Slovenian teenager told the BBC last month that he’d made £16,000 (around $20,000) in the previous seven months by selling stolen accounts.

The news about V-Bucks being used to launder money is anything but surprising, given that crooks are using Fortnite to make money in a mind-boggling variety of ways.

The credit card thieves have an eager market when it comes to selling discounted in-game currency. The game may be free to play, but there’s plenty of money to be made by selling in-game accessories like character outfits, weapons, skins for those weapons, and emotes (such as dances for their characters to perform).

The 1,000 virtual coins needed to buy all that colorful, virtual bling will set you back about $10. You can buy them from the official Fortnite store, as well as from some other vendors. There are ways to get free V-Bucks, but there are also plenty of scammers pretending to give them away, as Fortnite has warned users:

At these prices, you can see why players would wind up sniffing around for discounted coins in the dark corners of the web.

The investigation conducted by The Independent and Sixgill found that V-Bucks are being sold in bulk on the Dark Web, while smaller quantities are being advertised on the open web, on social media such as Instagram and Twitter. Sixgill analysts posed as interested buyers and uncovered coin sales being conducted worldwide – in Chinese, Russian, Spanish, Arabic and English.

It’s unclear how much profit is being made from such money laundering. Given that the vendors are accepting payment in bitcoin and bitcoin cash – both semi-anonymous currencies – it’s tough for law enforcement agencies to track.

Sixgill senior intelligence analyst Benjamin Preminger told The Independent that granted, erasing all the criminal activity centered around Fortnite is a tall order. But Epic Games could do a bit more to mitigate it, such as …

…monitoring the transfer of high-value goods in the game, identifying players with large stockpiles of V-Bucks, and sharing data with relevant law enforcement agencies.

3 comments on “Beware buying Fortnite’s V-Bucks, you could be funding organised crime”