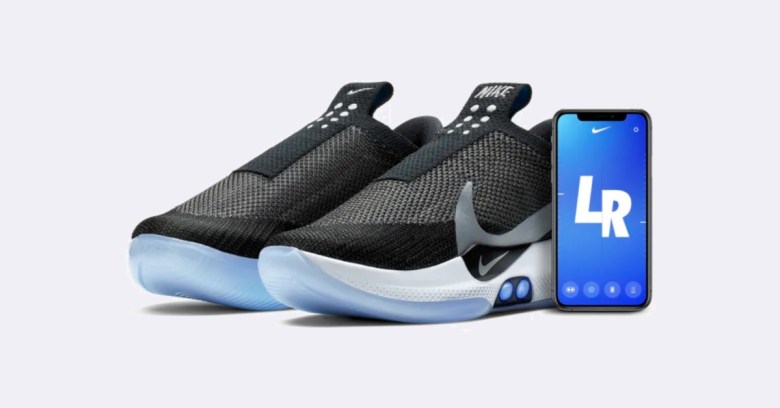 We’re not fans of the phrase “First World problem”, not even now it’s in the Oxford Dictionary of English

After all, if humans indeed lived in Africa long before they decided to see what Europe was like, surely Africa ought to be the First World, and we’d count upwards from there?

But no matter – the meaning of the term is now well-established.

An FWP is when someone who already has all of life’s necessities receives the terrible news that their local supermarket will no longer be selling pre-smashed avocado.

So we didn’t know whether to laugh or cry at the recent troubles reported on Google Play by users of an app called Nike Adapt, used to control Nike’s Back To The Future-like Nike Adapt BB trainers.

(BB, by the way, refers not to the diameter of a specific sort of shotgun and airgun pellet – by convention 4.5mm or 0.177″ – but to the phrase “Built for Basketball”.)

Those who are ready to drop $350 on a pair of trainers have probably heard of the cool new Adapt BB product, and may even have bought a pair, given that Nike’s website already lists them [2019-02-22T18:40Z] as sold out.

They’re popularly described as self-lacing, like Marty Mc Fly’s shoes in the movie Back To The Future, although they come pre-laced – it’s just that the laces tighten up all by themselves.

OK, not entirely by themselves – as you probably guessed from the words Google Play above, there’s an app for that:

Designed to give you a customized, consistent fit, the Nike Adapt BB is our first power lacing shoe that’s built for basketball. Strong yet flexible, it adapts to your foot to provide a locked-in feel for distraction-free play. Pair it with the Nike Adapt app to fine-tune the fit and customize the features from your smartphone.

Oh, in case you wondered:

If the battery runs out while you’re wearing them, don’t sweat it. Your shoes will still unlace so you never get stuck.

Manual overide is good to know about, because it looks as though it’s not just the batteries that might lose the plot, but also the Android version of Nike’s app.

As one user complained:

This app bricked my left shoe right out the box it’s not connecting or turning on. But my right shoe works just fine I’m starting to think this was a waste of money.

Another’s experience went the other way round:

The first software update for the shoe threw an error while updating, bricking the right shoe.

A third Adapter claims to have had problems of an ambipedestrian sort:

I played basketball at my local gym and when I was done the shoes would not loosen up! i thought that’s fine i know how to manual reset but then the buttons were not lighting up. no joke I was stuck in my shoes for about 45 min. thoughts of cutting the shoe came to mind.

Are we alone in wondering, “What happened after 45 minutes that fixed the shoes, and was it a boot?”

According to user Ricky La, there’s a solution ,and you’ll kick yourself for not guessing it for yourself:

to hard-reset shoes: 1) For one shoe, hold both buttons at the same time for 5 seconds. You’ll see two red flashes and then a solid red before fade. 2) After, press + hold one button throughout this process. Once it turns white, press + hold other button three times, one or two seconds each time. First time will turn red. Second time will turn yellow. Third time will turn green. Let buttons go for 15 seconds; it’s fully reset. Repeat for other shoe. Connection should work!

Seriously, folks, we have no idea whether Ricky’s “fix” works or not, but we can’t imagine that it could make things worse, assuming you actually get the sequence of shoe-clicks correct.

Another approach, apparently, is to eat humble pie and get an Apple user to help you out:

Or just chill out, like user Muscle Beach, who doesn’t seem worried at all, and is willing to wait:

I’m giving a rate of 5 stars because I love Nike and I know this is a easy fix.

You can see his dilemma: own a pair of $350 shoes that you can’t wear until an update comes out, or eat crow in front of an Apple fanbuoy or fangurl?