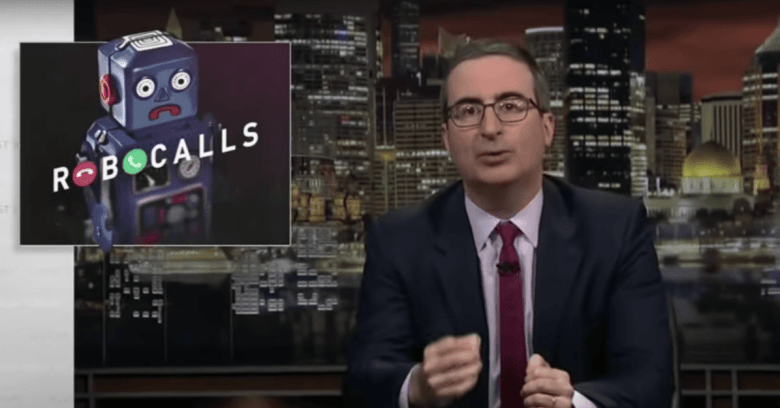 Americans are fed up with robocalls, and John Oliver of Last Week Tonight wants to do something about it.

Despite the existence of a do-not-call list and tools like call-blocking apps and caller ID to slow down incoming call spam, these tools have barely made a dent in the flood of harassing phone calls most Americans receive on their phones, with no real recourse to stop them.

Unfortunately it just seems to be getting worse year after year – in 2018 alone robocall volume in the US increased by 56.8% to 48 billion calls, and the Federal Communications Commission (FCC) reports that about half the phone calls made to cell phones in the US in 2019 will be robocalls.

Enough’s enough of that, says John Oliver, comedian and host of TV show Last Week Tonight. He and his show are known for stunt activism to make a larger point about various societal and political ills in America.

Last Week Tonight has also gone after the FCC a few times in the past, namely in highlighting net neutrality and how it would affect the average internet user. The first time the show aired a net neutrality segment, the FCC’s website was DoSed into silence by angry viewers.

In the 10 March episode of Last Week Tonight, Oliver reported that 60% of the complaints registered to the FCC are about robocalls. So in his show’s tradition, Oliver announced that he’s hoping to spur the FCC into real action by giving them a taste of the annoyance of everyday Americans by subjecting the FCC commissioners with this message every 90 minutes:

Hi FCC! This is John from Customer Service. Congratulations! You’ve just won a chance to lower robocalls in America today. Haha… sorry, but I am a live person. Robocalls are incredibly annoying, and the person who can stop them is you! Talk to you again in 90 minutes. Here’s some bagpipe music.

So if robocalls are such a problem, what is the FCC doing about it?

In March 2018, FCC Commissioner Ajit Pai (then Chairman) was pleased when federal judges negated a 2015 law meant to put an end to robocallers, saying that law was “an example of the prior [Obama-era] FCC’s disregard for the law and regulatory overreach.” But just this February, Pai warned telecommunications companies that the FCC would be forced to intervene if the companies can’t figure out a plan to stop robocalls this year.

Pai and the FCC are urging telecoms companies to implement better caller authentication, but the companies have pushed back, saying they need more time. It’s not clear what the FCC would do if the telecoms do not comply, aside from levy fines.

In the meantime, “it turns out robocalling is so easy it only took our tech guy literally 15 minutes to work out how to do it,” said Oliver, just before hitting a comically oversized button to trigger the start of his anti-robocalling robocalling campaign.