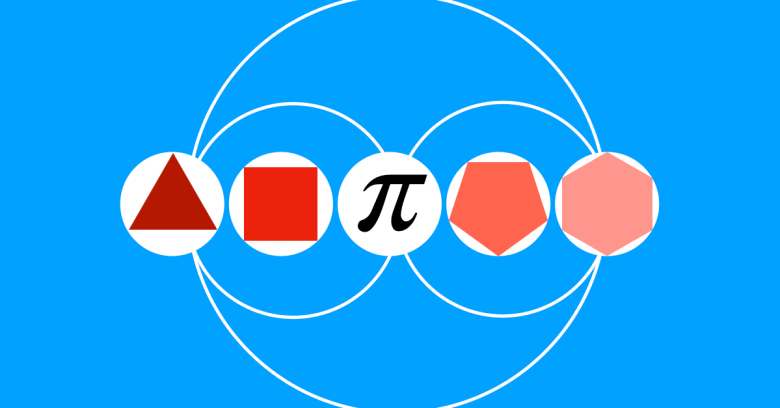 It’s Pi Day – or World Pi Day, if you prefer, or even Universe Pi Day, given that Pi is a universal constant.

As you may remember from school mathematics, Pi is the cool and amazing ratio you get when you divide the distance around a circle by the distance across it – the number comes out identically for every circle, no matter how big or how small.

Quizzically put, it’s Pi that makes bicycle wheels go round and round smoothly, rather than going kerbump, kerbump on a flat spot or gaflop, gaflop on a bulgy bit.

(In mathematics, you’re supposed to use the Latinny word circumference, meaning carrying around, and the Greeky work diameter, meaning measurement across, but it’s the words around and across that matter.)

The Ancient Greeks really struggled with Pi – indeed, they struggled to the point that it’s almost a satirical joke that we now call the constant after a Greek letter, and even write the lower-case Greek letter π to denote it.

Ancient Greek mathematicians were really smart, but they weren’t very open-minded, so they struggled with what we now call irrational numbers.

To the Greeks, numbers of that sort weren’t just irrational, they were unbelievable, inconceivable, impossible, even sacriligeous, so the Pythagoreans simpy denied the possibility that they might exist.

There was no limit to how complicated a fraction could be, but eventually you should, could, would – MUST, insisted the Greeks – find a fraction to represent any possible number.

In the days before modern computers, fractions that came out close to the value of Pi were very useful, because you could work them into calculations using log tables more easily than using a lengthy number in decimal notation.

Dividing by 10,000 is easy – just chop off four digits at the end – but that five-digit multiplication by 31416 is a real headache, especially if you decide to do it exactly using long multiplication.

If you use 22/7 instead of 3.1416, you get an easy multiplication followed by a single-digit division, which is easier overall than a five-digit multiplication:

Another popular fraction for Pi when more accuracy is needed is the easily-memorised 355/113.

This approximation of Pi was widely taught in schools and engineering colleges – despite its simplicity, it comes out at 3.14159292, a number that differs from the decimal expansion of Pi only at the seventh decimal place:

No matter how hard you try, you’ll never find a fraction that exactly represents Pi, because there isn’t one.

You can get really close, for example by drawing a polygon that fits exactly inside a circle and then increasing the number of sides of the polygon until you can’t even see the tiny segments that are between the polygon and the circle. 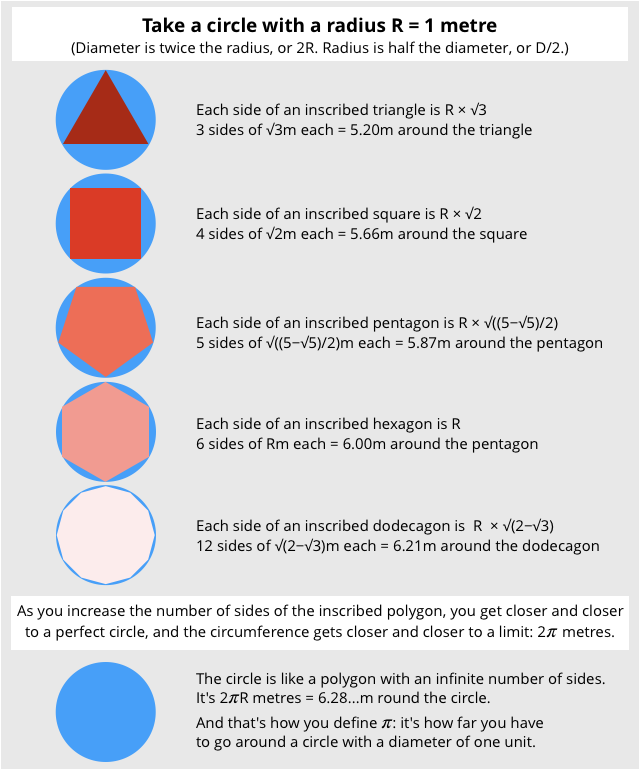 You’ll never quite get to the true value of Pi, however, because there will always be some teeny parts at the edge of the true circle that you haven’t covered up.

You can’t get downwards to Pi from the outside of the circle, either.

You can try, by drawing polygons that just skim the outside of the circle, and the distance around your polygon will decrease every time you make it more accurate by adding more sides.

But even though you’re now homing in on Pi from above, you’ll never have a true circle or finish calculating its true circumference.

Simply put: Pi is trivial to describe and even to define, but it’s impossible to write down its value, no matter how many sides your polygon has, how complicated your fractions become, or how many decimal digits you churn out.

This drove the Ancient Greeks crazy – in fact, there’s a legend that says the mathematician Hippasus was deliberately drowned to stop him revealing a dreadful secret he’d proved, namely that the square root of 2, just like Pi, could never be turned into a fraction.

A troubled history is no discouragement

As you can imagine, the troubled history of irrational numbers, and the fruitlessness of trying to calculate them to a conclusion, hasn’t stopped computer scientists from working on Pi.

Indeed, just in time for Pi Day 2019, Emma Haruka Iwao, a software engineer from Seattle in Washington, cranked our a world record 10 Pi trillion decimal digits of the famous number:

See how Seattle-based, Googler @Yuryu, used Google Cloud to calculate 31.4 trillion digits of Pi for a new world record. This is the first time π has been calculated using the cloud. Take that supercomputers!

So, there you have it!

Pi, figured out to way more precision than you could ever need, but still without the perfection you get just by writing the single letter π.

There is a cybersecurity story in here – two, in fact.

We’ve written before, for example, about mobile phone networks and mapping apps that, when faced with computer geolocation data that is no more precise than “somewhere in the continental USA”, insist on giving GPS co-ordinates that accurately locate the geographic centre of the country.

They recklessly – and dangerously! – turn raw data that says, “We literally have no detail about where to look” into allegedly precise information that insists, “We took an average of sorts, and now, by magic, we know exactly to within 10 metres.”

Apparently, the geocentre of the USA is a farmhouse in Kansas whose residents are understandably tired of being “pinpointed” precisely for crimes they didn’t commit, spam they never sent, orders they never placed, phones they’ve never owned, meetings they never called.

We’re stuck with having Pi Day on March 14, as it’s called in North America, using the weird North American data format, because it’s the only way to get 3.14 to look like a date – if 14 were to denote the month, Pi Day could never exist.

However, RFC 3339 urges you to write dates and times consistently, using an unambiguous format that, when sorted alphabetically, automatically ends up in chronological order.

Simply put, if you wanted to denote 4pm on this year’s Pi day in the city of Amsterdam, you’d say something like this:

Write the year in the Christian Era, always with all four digits; then the month and day with leading zeros; then a handy T as a separator; then the time using the 24-hour clock, with a consistent number of fractional digits; and finally Z to indicate Zulu time, meaning you’ve got rid of any pesky timezone by converting to Universal Time Co-ordinated (UTC).

Technically, RFC 3339 allows you to include an explicit timezone (e.g -8 or +10) instead of converting to Zulu time, but we urge you always to convert and always to use the Z marker to say so.

When it comes to data and timestamps: say what you mean, and mean what you say.

17 comments on “Serious Security: What we can all learn from #PiDay”