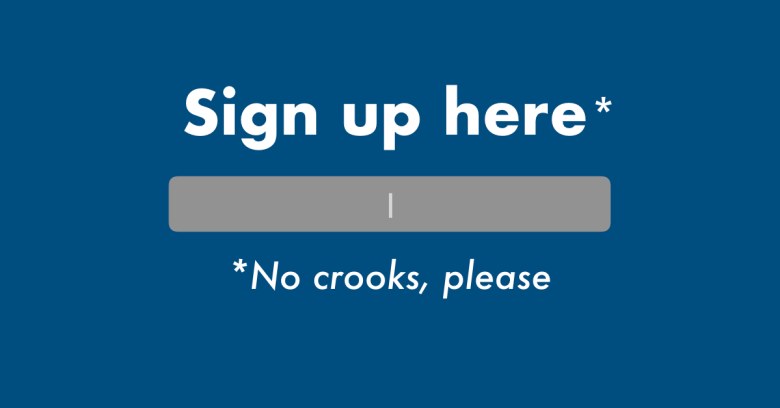 Spamming is a word we all know and an activity we all loathe – it’s when crooks blast out unwanted emails for products we don’t want at a price we won’t pay from from suppliers we’ll never trust.

And the word spam has given us related terms such as SPIM for spam via instant messaging; SPIT for spam via internet telephony – robocalls and fake tech support scams, for example; and SPEWS, which is our tongue-in-cheek name for spam via electronic web submissions.

Russian cybersecurity researchers at Russian outfit Dr.Web recently reminded us all of a third way that crooks can use SPEWS to do their dirty work.

They noticed spamtrap emails that actually came from genuine corporate senders, but with poisoned web links in the greeting part.

Instead of saying, Hi, Mr Ducklin, as you might expect from a genuine email from a trustworthy brand, they said something more along the lines of Hi, MONEY FOR YOU! [weblink here], but with a legitimate-looking sender.

Indeed, digging into the emails showed not only that the sender was legitimate but also that the email did originate from a server you’d expect – there was no sender spoofing going on.

(Spoofing is where the crooks deliberately put a bogus name in the From: field, so at first glance the email seems to come from somewhere you trust.)

What the crooks are doing is subscribing to official corporate mailing lists but putting in other people’s email addresses so that the victims receive a signup message, even though they didn’t sign up themselves.

Ironically, the crooks are abusing a built-in mailing list safety feature – one that’s been de rigueur in most of the world for some time, if not actually required by law – that sends a one-off confirmation email before actually activating a mailing list subscription.

This safety feature is often referred to as double opt-in – you won’t get any email until you put in your address (opt-in #1), and then you won’t get anything but a confirmation message until you reply to or click a link in that message (opt-in #2).

Double opt-in is meant to stop other people signing you up, either through accident or malevolence, but it does mean that anyone with access to the sign-up form can get a legitimate company to send you a one-shot email from one of its legitimate servers.

To a crook, that feels like a challenge, not merely an observation – a genuine email server that can be automatically or semi-automatically triggered to send a message to someone’s else’s email address.

In many cases, signup emails are dull and unexciting – they don’t need to be inviting or attractive, after all, because they’re meant to be simple confirmations of a choice you have already made.

But some organisations can’t resist giving the glitzy marketing treatment even to their mailing list confirmations, filling them with logos, clickable links, tempting offers and all the other COOL THINGS YOU WILL ENJOY as long as you actually do complete your signup.

Even though marketing to you as part of getting approval to market to you is annoying, receiving one glamorous and groovy but potentially unwanted email that you weren’t expecting probably isn’t a big deal.

After all, ignoring the email automatically means that you’ll get no more of them.

What is a big deal is that Dr.Web noticed that several major brands and services were incautious about how much information from the signup form itself they trustingly copied into the signup email and ‘reflected’ back to the supplied email address.

For example, instead of signing me up as Duck and getting an email pushed out to me with a greeting Hi, Duck…

The spammy part of the confirmation email would end up wrapped into a visually appealing, on-brand, professionally produced HTML page, giving it cultural credibility it didn’t deserve.

Worse, the email itself would pass all anti-spam sender checks such as SPF, DKIM and DMARC, because it really, genuinely, actually came from the right server, giving it a quantifiable technical credibility it didn’t deserve.

When re-using untrusted data submitted from outside, be careful not to ‘reflect’ or pass on any of that data in the body of any web page your return, or email you generate.

Otherwise you open up your website or email server to reflection attacks, where you send out dodgy content that I get to choose.

If I give my name as Paul (or some crook gives my name for me), then sending me an email with the text Hello, Paul is mostly harmless, albeit presumptuous given that you actually have no idea who I am.

But if a crook gives give my name as Why not try this fantastic website [insert web hyperlink here], then sending me an email with that text in it is dangerous, because it could lead to a phishing site, to malware, to inappropriate content, and so on.

As so often in cybersecurity, less is more!

6 comments on “Serious Security: How web forms can steal your bandwidth and harm your brand”