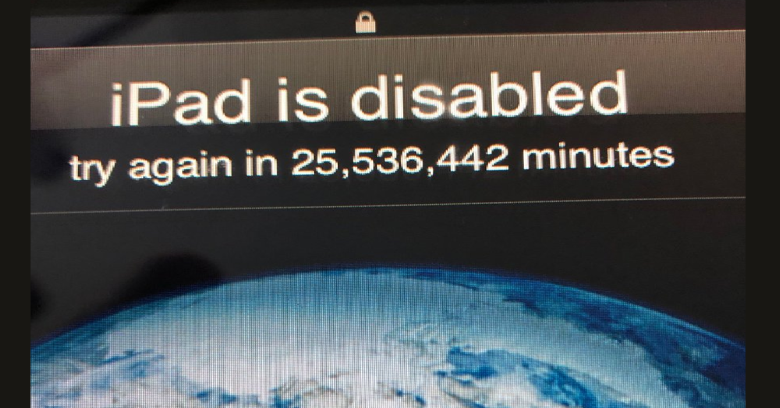 Last week a father thought he’d been permanently locked out of his Apple iPad after his young son repeatedly entered an incorrect passcode.

‘Permanently’ in this context means 25.5 million minutes (or 25,536,442), equivalent to over 48 years. That’s the wait time that confronted journalist Evan Osnos last week when he looked at the iPad screen after recovering it from the youngster’s grasp.

Naturally, he turned in his hour of need to the world’s biggest tech support system, Twitter:

But how does such a thing happen? The short answer is not easily.

A lot of stories mention that Osnos’s son entered an incorrect passcode 10 times without mentioning how hard that is to do this in a short space of time.

It’s common knowledge that if you get the code wrong five times, the user is locked out for one minute – that could have happened in seconds.

However, entering a sixth incorrect code delays the next guess for five minutes, a seventh to 15 minutes, and so on until at the tenth attempt, the device is disabled.

Alternatively, if this option has been set by the user, at the tenth incorrect attempt it will automatically erase the device.

But the timeouts between guesses after number five mean that it should take three hours to enter those 10 incorrect guesses, which Apple reasonably assumes is beyond the patience of most toddlers.

If there’s a figure which should impress us it’s not the 48-year timeout so much as the three hours of persistence it took to get to that stage.

In fact, this is a common problem that crops up regularly on Apple support forums. In 2018, a mother in China also reportedly complained about the same 48-year wait after an identical intervention by a child.

Run a web search and you encounter variations on the same story stretching back to the days of early iPods and iPhones.

What seems to have elevated this story to media attention was that the victim was a journalist with lots of Twitter followers who’d never heard of the problem.

The good news is that the screen message about being locked out for decades is wrong – there is a way to recover the device – although the order of button presses required varies slightly depending on which version of iOS or iPhone/iPad is involved.

Update on toddler-iPad-lock-out: Got it into DFU mode (don’t hold down the sleep/power button too long or you end up in recovery). Now restoring. Thanks to those who shared advice!

Apple explains the procedure on its support site, which requires connecting to the user’s iTunes account to initiate a restore. This assumes users will have automatic backup to iCloud turned on – Settings > [your name] > iCloud > iCloud Backup.