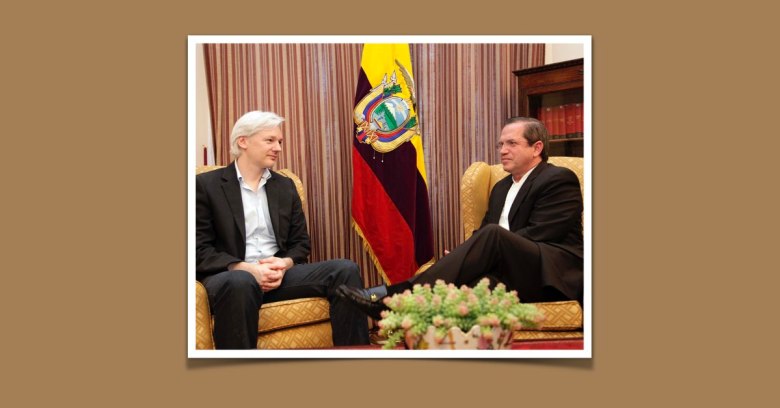 Assange rose to fame by leaking secret government documents that the WikiLeaks organisation acquired from a wide range of sources.

The best-known WikiLeaks exposé is probably Cablegate, a massive dump of US State Department diplomatic cables exfiltrated by junior US soldier Bradley Manning, now Chelsea Manning, who was arrested in 2010 for making off with some 30 years’ worth of confidential US data.

Manning apparently burned the data to a rewritable CD, pretending she was listening to Lady Gaga tunes from the CD while writing hundreds of thousands of diplomatic cables onto it.

Amazingly, one person – and a soldier with the rank of Private, at that – was able to copy everything without triggering any sort of “data access overload” warning at any point.

For her part in that leak, Manning received a whopping 35-year prison sentence, ultimately serving seven years before being released by then-President Barack Obama at the end of his term in office.

Assange, however, remained free, after a fashion, until yesterday afternoon, when he was arrested by police in London.

In principle, and in law, say Assange’s supporters, journalists are allowed to publish data that’s in the public interest, even if it was illegally acquired, and are allowed – nay, required, or else who would ever blow the whistle again? – to protect their sources, even if they know those sources are crooks.

Journalists aren’t supposed to break the law themselves to get hold of leaks, for the simple reason that breaking the law is illegal, and they aren’t supposed to collude with crooks to organise for leaks to happen, but it’s OK to report on important information that comes their way otherwise.

That’s an important principle, say supporters of a free press, because it serves the public interest and helps to prevent rogues and rotters in high places from sweeping their sneaky shenanigans under the carpet every time.

At the same time, keeping a degree of separation between journalists and their sources avoids offering journalists a blank cheque to break the law knowing that as long as they find something, anything, before they get caught, they can turn it into a “get out of jail free card” by claiming to have acted for the greater good.

(Think of the distiction between receiving leaks indirectly and actively going after them yourself as the difference between writing about a political intrigue that was exposed in a hacked voicemail that was sent to you anonymously, and hacking into a politician’s voicemail yourself in the hope of exposing an intrigue.)

Where Assange’s case gets fascinating is that, when arrested yesterday, he was actually inside the Ecuadorean embassy in London.

Assange had been living in this “virtual Ecuador” since 2012, when he jumped bail to avoid being extradited to Sweden to face a criminal investigation into allegations of sexual assault.

Technically, the Ecuadorean embassy isn’t actually part of Ecuador – there’s no formal land border at the door, and the space occupied by the embassy hasn’t been ceded in a treaty by the UK.

Indeed, ceding the territory would be almost unspeakably complicated, given that it’s a first floor flat (or a second story apartment in American English) in an upmarket Kensington residential block.

Nevertheless, by international agreement, police from the host country generally leave diplomatic premises alone, and don’t exercise their right of entry to effect an arrest except in very special and unusual cases.

That was the sort of protection from arrest that Assange had enjoyed, until yesterday, inside the Ecuadorean embassy.

Assange and his followers had successfully argued that if he were extradited from the UK to Sweden to answer his sex offence charges, he would then be almost certainly be extradited a second time to the US to face charges related to his data-leaking activities, which would be unthinkable – he might even, they said, face the death penalty.

So Ecuador granted him asylum and with it permission to stay in the London embassy, where Ecuador would refuse to allow UK police to come in and nab him for failing to face the music in court over those Swedish sex crime allegations.

In a bigger embassy, Assange might have been better off because he could have got into a diplomatic vehicle on the embassy property, and then been driven out of the embassy, and perhaps even have left the country, under what would amount to continuous diplomatic protection.

But the London embassy of Ecuador is a flat that’s above ground level, so he’d need to have left the embassy proper and walked through plain old London to reach the street or the car park and get into a diplomatic car.

Until 2015, a regular police patrol that was maintained around the flat would almost certainly have nabbed him, so he didn’t try to get out.

Ater 2015 he stayed put, perhaps because the Ecuadoreans weren’t willing to create a diplomatic incident by knowingly letting him out of their diplomatic protection, even briefly, without informing their British hosts.

Anyway, that all ended yesterday when Ecuador withdrew his asylum, thus presumably removing any special claim he might have for ongoing diplomatic protection from arrest, and calmly invited in the UK police to arrest him for skipping bail back in 2012.

According to reports he was whisked off to court and tried for the bail-jumping offence, where he pleaded not guilty but was convicted by the magistrate and remanded in custody to await sentencing.

Apparently, he can expect a fine or a prison sentence up to a year.

He was also arrested a second time, this time for what he’s always said he was afraid of in Sweden – to face extradition to the US.

So, after seven years holed up in the Ecuadorean embassy – he was even granted citizenship during his stay – he’s now facing extradition anyway.

A hacker, not a spy

The silver lining for Assange is that he’s not wanted on charges of publishing leaked US data, something that the US Bill of Rights seems to consider constitutionally protected.

Very simply put, he’s wanted on hacking charges that could get him up to five years in prison if convicted, for allegedly conspiring with Chelsea Manning to crack passwords and break into accounts in order to make the Cablegate leak happen.

Sadly for Manning, she’s back in custody for refusing to testify against Assange at a recent hearing in the US – a hearing that has acquired a lot more significance since yesterday.

Fascinating stuff – and you simply couldn’t make it up.

Hurry up and wait

Ironically, Assange is now stuck in a UK lockup, remanded in custody to await sentencing on his bail conviction and to face his new extradition hearing.

There’s also a chance that Sweden might ask for him once again – he evaded some of the allegations he was facing there because the Swedes ran out of time to charge him, but a more serious allegation remains that the Swedes can apparently prosecute until 2020, when it too will drop off the radar.

If Assange fights US extradition as hard as you might expect him to, he could spend years more locked up even if he eventually gets off – the chance that the UK judiciary might grant him bail again feels vanishingly small given the disappearing act he pulled last time.

Gary McKinnon, a UK resident wanted in the US on hacking charges dating back to 2001 – offences that he actually admitted – went through 10 years of legal hearings before being told he wouldn’t be sent to the US, on the grounds that he was seriously ill.

Lauri Love, a UK hacktivist wanted in the US for alleged hacking crimes committed in 2012 and 2013, went through nearly five years of court wrangling to avoid extradition, but may yet face trial in the UK instead.

It almost feels as though Assange would gain his freedom fastest by getting to the US as quickly as he can of his own accord, doing some plea bargaining and avoiding a trial, serving his time and then letting himself be deported to Australia or Ecuador, being a citizen of both countries.

Somehow, we don’t see that happening.

What do you think? Sex crime fugitive or information freedom fighter? Journalist or cybercrook? Radical or rotter?