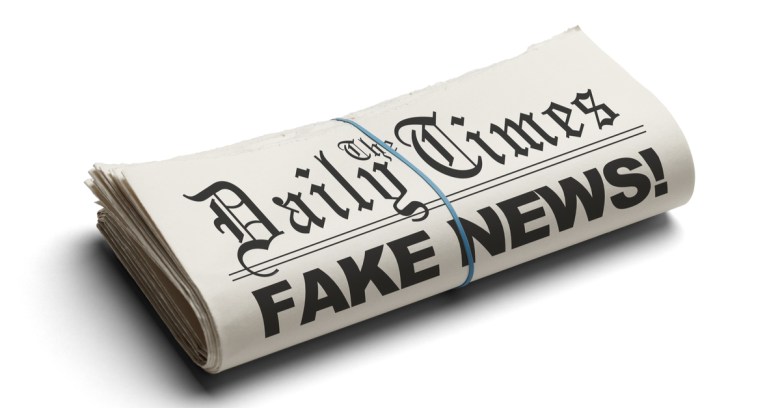 In 2017, Facebook banned several fake news sites. One of them was the one that “Tamara” (not her real name) was writing for.

Poof! went her livelihood. Poof! went her boss’s Facebook Messenger account. When she finally got through to him, he sounded “shook up,” said Tamara, a Macedonian fake-news writer who recently described to the BBC what it’s like to manufacture mental sludge.

She didn’t hear from him again until last summer, when “Marco” – an awkward young man who seemed to be embarrassed about being younger than his employee – called to see if Tamara wanted to write for another website. She declined.

It’s not that she was overwhelmed with guilt that her job consisted of copying and pasting obviously made-up stories from other sites after searching for strings such as “Muslim attacks,” then creating a mashup of fact and fiction and searching Google for images to attach to the articles she published.

And it’s not that she agreed with the content she was writing. Tamara says she’s a liberal, and she was “horrified” by the content she had to rewrite. She told the BBC that she basically turned off her brain and became a set of hands at a keyboard as she rewrote US articles to hide them from being flagged as plagiarized content.

I try to split myself and my own beliefs from the stuff I was writing. So I tried to stay as out of it as I can. I just saw it as writing words. I tried not to think about writing propaganda.

So why did she stop?

Tamara didn’t really say why she turned down Marco’s invitation to write for his new site, but it sounds like the splitting of her beliefs and the garbage she was posting became untenable.

I would usually shorten these kinds of articles and just skip the parts I don’t want to write. Or maybe put something that I want to be there.

For example, if they are attacking, let’s say, Muslims all the time, I would get so furious about all their attacking that I would cut all of the bulls**t and maybe put something nice at the end that the boss wouldn’t notice because he wouldn’t read all the articles all the time. It would ease the pain, my pain.

… something like ‘and at the end of the day, everybody is equal’. Something like this in the context of the article.

Besides obscuring the plagiarization, Tamara’s job was also to make the articles more compact and more likely to be shared.

It’s propaganda, Tamara said, but there’s no Russian puppetmaster pulling the strings on fake-news writers like her. There’s nobody in the Kremlin who’s telling them how to influence the US elections.

Rather, it’s all about the clicks. It’s all about the ad revenue. It doesn’t matter how preposterous the content is: what matters is that somebody – or many somebodies – open the articles and generate ad impressions.

This is a thriving industry in the Macedonian city of Veles.

In 2017, CNN published a report about the hundreds of producers of fake US news that have established a profitable fake-news industry based in the small city. CNN’s reporter talked to one producer who claimed to be making as much as $2,000 to $2,500 per day off of his fake news site, which had around a million Facebook likes at the time. To get around account shutdowns, the producer said, he’d buy Facebook accounts off of kids for two euros. That’s more than those kids ever had, he said.

Tamara told the BBC that her boss, Marco, ran two sites, which, combined, had more than 2 million Facebook followers.

Political meddling is only one slice of online influence

The 2016 US presidential election was a circus, but Tamara’s story shows that it wasn’t just because of Russia and its infamous troll factory.

That factory, which also goes by the name of the Internet Research Agency (IRA), created an army of trolls that flamed Hillary Clinton, waged a pro-Trump propaganda war, and turned Americans against their own government in the election. The IRA also set loose left-wing trolls, leaving most Americans to presume that the goal wasn’t entirely as clear-cut as simply being pro-Trump; rather, there were elements of flame-fanning on either side of the political divide.

But as both the 2017 CNN report on the Veles fake-news industry and the BBC interview with Tamara make clear, the term “fake news” doesn’t come close to describing the nuances of this type of online influence. After all, Tamara didn’t create fake news: she created something far more pernicious. From the BBC:

Much of what she produced was misinformation based on real events, written in a way to provoke fear and anger among its readers. In the aggregate, the stories gave a false, skewed view of the world, playing to people’s prejudices.

That thing happened, the people were there, the place was there. So it was never [100% fabricated] fake stories. It was propaganda and brainwashing in the way of telling the story.

It would be so much simpler if the stories were complete rubbish, but they’re not. Not entirely. Is it any wonder that Facebook last year ditched the “fake news” flag, admitting that it was only making things worse, as in, akin to waving a red flag in front of people’s faces, who then went right ahead and zealously clicked and shared away?

So many types of fakery farms

When it comes to propaganda as a path to profit, so-called content farms do something similar by tracking search terms that are popular enough in the moment that they might be worth something, yet are unusual enough to have no obvious high-ranking pages or videos yet.

Such farms hire people to write articles or even to film videos that are just about good enough to pass muster with the search engines as non-fake, but which are also ill-researched, rushed, inaccurate or simply made up. They get the content up, they get it visible, and in come the clicks and the profits.

The content enjoys a brief run as the top search result, meaning that people will click on it. There’s a chance to sell ads and make money on what is suddenly a top-ranked and thus implicitly trustworthy page – even though it’s inauthentic and possibly even downright dangerous drivel that was written not to be informative or correct but to be mistaken for something that has value.

You might argue that political fake news is worse because it might influence your overall opinion or your world view; but content farms are more similar than different, peddling apparently trustworthy fake information without any moral concern over how readers might use it.

You can imagine the harm that a credulous reader might experience from trusting an official and legitimate-looking piece that was dashed off in five minutes to match search terms such as “fix electrical outlet”, “refill camping gas bottle” or “emergency bicycle brake repair”.

Let’s not be as stupid as Tamara thinks we are

We’re always warning kids that mystifyingly lonely, purportedly famous people who reach out to strike up random romances with people they’ve stumbled across online have no credibility whatsoever.

Likewise, we’ve all learned that if we argue with election-related trolls spouting outrageous statements online, we’re possibly arguing with cardboard cutouts created by nation states such as Russia or Iran.

We should also bear in mind that in spite of Congress’s interest in stopping election meddling in 2020, the incendiary things we come across online might well be pushing our buttons for a more banal reason than to carry out an adversarial nation’s agenda.

In other words, sometimes, it’s just about making money, no matter how politically inflammatory a given post.

Be careful out there, everybody. Let’s not swallow the sludge that Tamara used to create and thinks we deserve if we’re stupid enough to believe it.

Whether it’s political propaganda that seduces you into believing made-up nonsense, or ad-grabbing ‘self help’ information that persuades you to trust advice that could put you and your family in serious danger, there’s no shortage of online sleazebags speedily churning out content that’s cunningly tuned so that your favorite search engines will see it, trust it and promote it.

Use search engines and ‘news’ feeds wisely: their artificial intelligence is good at finding stuff, but it’s your human intelligence that has to make the final call on whether to accept it. To rework an old aphorism: ‘Make sure your brain is in gear before opening your mind.’ Never forget that the primary goal of most search engines is to make money out of what you click, not to improve the world by making you smarter. That part you have to work on yourself.

7 comments on “Fake news writer: If people are stupid enough to believe this stuff…”