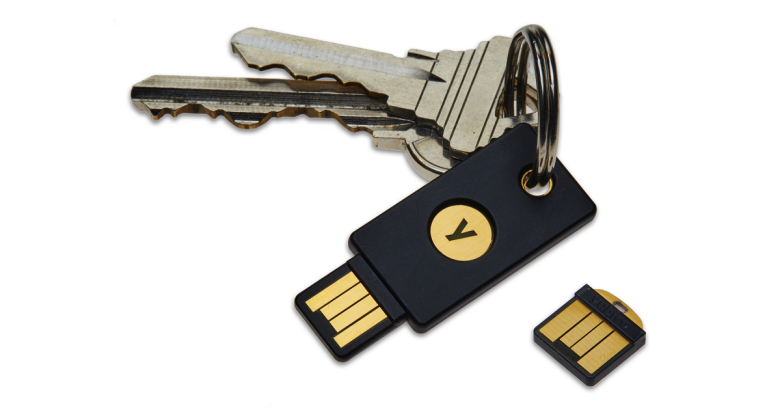 Security token maker Yubico has issued an important advisory affecting high-end versions of its YubiKey authentication key, arguably the most significant vulnerability discovered in this class of product to date.

Yubico describes the bug in its FIPS series as being:

Where the first set of random values used by YubiKey FIPS applications after each device power-up have reduced randomness … for the first operations performed after YubiKey FIPS power-up. The buffer holding random values contains some predictable content left over from the FIPS power-up self-tests which could affect cryptographic operations which require random data until the predictable content is exhausted.

In other words, for the first operation after power-up at least, the cryptographic material produced by the key isn’t as random as it should be for secure encryption, creating a hypothetical short-term weakness that is only ironed out when that data has been consumed.

This affects cryptographic algorithms to different extents. For RSA it’s a modest 80 bits out of a minimum of 2,048 while for ECDSA it’s more like 80 bits out of 256 which could:

Allow an attacker who gains access to several signatures to reconstruct the private key.

These differences mean that the weakness is worse in some products than in others, for example the PIV Smart Card and OpenPGP implementations (which use RSA) compared to the FIPS FIDO U2F keys (whose authentication depends on ECDSA).

The Federal Information Processing Standards, or FIPS, is a suite of US standards for products used in environments such as the federal government or military that demand sophisticated encryption, hashing and signing algorithms.

Getting even a basic FIPS certification is time-consuming and expensive because NIST has to test compliance to all sorts of security characteristics, including things like physical tamper-proofing in addition to the robustness in the way encryption algorithms have been implemented.

Device makers jump through these hoops because they have to – no FIPS compliance at the required level and selling to the Feds becomes a non-starter.

It’s worth mentioning all this because the issue of FIPS has had a direct influence on the timing of Yubico’s advisory.

It seems the weakness was discovered some time ago but the fix only shipped to customers on 30 April 2019 once it had passed FIPS certification.

That’s the extra complication of FIPS, which applies to everything, including urgent security updates.

As arcane as this might all sound, encryption stands and falls on fine margins. Even a modest theoretical weakness must be fixed ASAP and the new code submitted for checks.

In fairness to Yubico, security advisories affecting any of its products have been few and far between, and most of the small number that have come to light have been caused by interactions with other products, such as the Google Chrome’s WebUSB flaw discovered in 2018.

That said, the fact that something that looks as baked-in as a security token might require a firmware update or even physical replacement is a new experience for customers.

Coincidentally, Google recently suffered similar problems when a weakness was discovered in its implementation of the Bluetooth Low Energy (BLE) in the Bluetooth version of its Titan 2FA hardware tokens.

That forced a recall of affected keys, which at the time of writing no longer seem to be available for purchase.

If you own an affected FIPS YubiKey bought before 30 April 2019, it can be replaced at no charge although how this is done will depend on which channel it came through. FIPS YubiKeys ordered on or after that date have updated firmware and don’t need to be replaced. Yubico said:

At the time of this advisory, we estimate that the majority of affected YubiKey FIPS Series devices have been replaced, or are in process of replacement with updated, fixed versions of the devices.