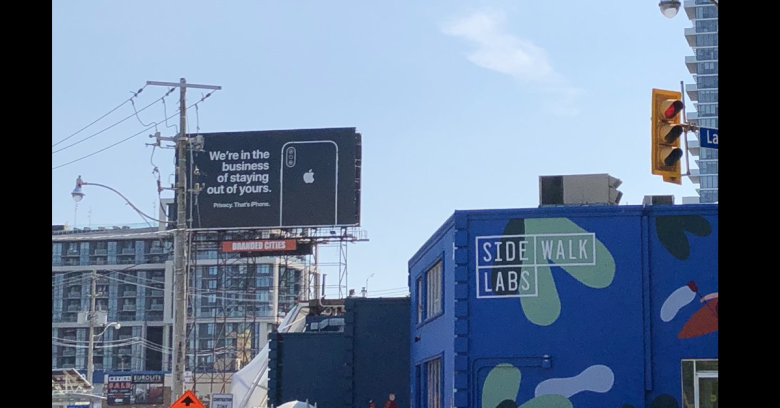 Some say that Apple’s strenuous Privacy-R-Us marketing campaign is hypocritical, but that’s not stopping it from continuing to troll Google over the issue.

The billboard depicted an iPhone and linked to apple.com/privacy: the spot where Apple proclaims that privacy is a “fundamental human right”.

It doesn’t gather and share your data, Apple promises, be it from taking a photo; asking Siri a question; getting directions; what your heart rate is after a run; what news stories you read; where you bought your last coffee; what websites you visit; or who you call, email, or message.

You can do it knowing that Apple doesn’t gather your personal information to sell to advertisers or other organizations.

Apple products are designed to protect your privacy – every Apple product is designed from the ground up to protect that information. And to empower you to choose what you share and with whom.

But that billboard was then, and this is now: Apple has a new billboard and a far more specific target. This time, the company has erected a privacy billboard at the site of a developing “smart city” called Quayside. Some are calling the neighborhood, on Toronto’s eastern waterfront, a privacy dystopia in the making. It’s going to be sensor-thick, and it’s tangled up with the uber data-collecting Google: the developer is Sidewalk Labs, which is a subsidiary of Google’s parent company, Alphabet.

New Apple billboard outside Sidewalk Toronto HQ: “We’re in the business of staying out of yours.” pic.twitter.com/I24iAxkXzZ

Apple’s new billboard, positioned outside Sidewalk Toronto headquarters, again depicts an iPhone. The tagline: “We’re in the business of staying out of yours.”

The vision for Quayside is that of a smart city built “from the internet up”. As the Atlantic reported last November, sensor-collected data will be used “to disrupt everything:” traffic congestion, healthcare, housing, zoning regulations, and greenhouse-gas emissions. From the Atlantic’s writeup:

Long before flying cars, smart sensors won’t just be in our mattresses or our bidets, they’ll be embedded in the walls of our homes and the concrete beneath our feet.

This always-data-slurping vision has drawn a storm of backlash against Sidewalk Labs and its real-estate partner, Waterfront Toronto, both of which have been criticized for dismissing privacy concerns and allegedly misinforming residents.

As of November 2018, four prominent people had resigned from Waterfront Toronto’s and Sidewalk Labs’ advisory board over concerns about privacy and lack of public input, including Ontario’s former Privacy Commissioner, Ann Cavoukian.

US venture capitalist Roger McNamee – an increasingly outspoken critic of tech giants’ approach to privacy – has described the development plans as “the most highly evolved version to date” of the type of “surveillance capitalism” that’s central to the business models of Google and Facebook in particular.

No matter what Google is offering, the value to Toronto cannot possibly approach the value your city is giving up. It is a dystopian vision that has no place in a democratic society.

Perhaps not, but Apple’s no dummy: Quayside definitely has a place in its privacy marketing.

Apple may be quite happy to throw stones at Google, but there are those who believe it lives in a glass house. In May 2019, the Washington Post reported that its “privacy experiment” showed that in a single week, 5,400 hidden app trackers were guzzling iPhone data. From the article: