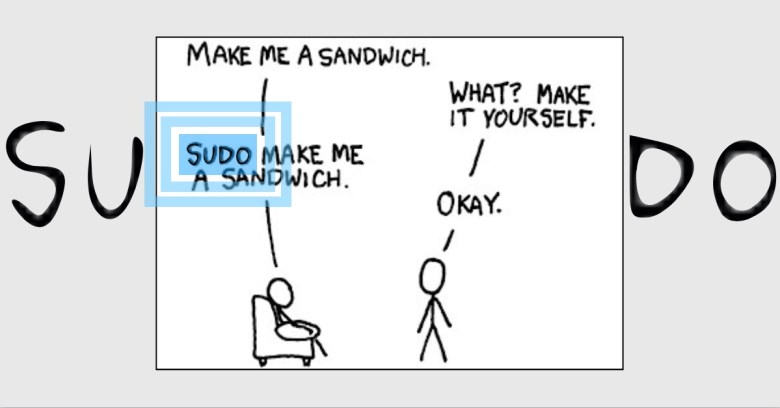 Most of the year, sysadmins have to worry about things that are bugging YOU.

They have to worry about the things that YOU need fixed right now, that YOU have decided are more important than everyone else’s problems put together, and that YOU shouldn’t have to put up with if only the world were fair, etc.

No matter that the problem YOU are having is caused by a problem that YOU created.

If your sysadmins were any good they’d have set things up so that YOU couldn’t have got it wrong in the first place.

No matter that they did, indeed, set it up just like that but YOU complained about feeling stifled…

…and YOU turned off the safety feature all by yourself, with the help of your neighbour’s friend’s cousin’s 9-year-old child, who’s just happens to be a computer whizzkid.

Well, today is #SysAdminDay, which means that it’s time for us to do something for those sysadmins for once.

So we thought we’d get to the bottom of a thorny problem that has provoked a number of arguments that we’ve deliberately started been caught in the middle of. What is the right way – the ONE TRUE WAY, in fact – to pronounce the word sudo?

You logon as a regular user, which is the account you use for regular work such as keeping your resumé tweaked in LibreOffice, checking the Bitcoin price in Firefox, watching cat videos in VLC, playing retro games in MAME and recompiling the kernel.

To get rootly powers, you need to tell the computer that what you are going to do next should be boosted to run under the admin account.

On Windows, you can use the aptly named and easy-to-say runas command:

On OpenBSD, which favours an approach based on the strip-back-the-fluff-and-keep-it-lean-mean-and-clean (if that is not a tautologically convoluted way of describing the OpenBSD view of life), it’s just doas.

But Linux, and macOS for that matter, steers you towards the sudo command.

Now, sudo is often misconstrued to mean “superuser do”, or “do the next command as the superuser”, but that’s not strictly correct.

The sudo command is short for “substitute user and do…”, or more precisely “set UID and do…” the command that follows.

You can therefore run sudo to switch temporarily to any other user, subject to the privileges you have been granted, though the default user you’ll turn into is, indeed, root.

On the other hand, the superuser, or root, is pretty much Prime Minister, Minister of Defence, Minister of Finance, Chief Justice and Head of State (that’s His/Her Majesty to you or me) all at the same time.

There’s not really any sort of in-between user – you don’t get an account called demiroot or hemidemisemisuperuser – it’s everything or nothing.

That’s why, in the XKCD cartoon above, the person who’s being asked to make the sandwich collapses, in an instant, from “make it yourself” rejection into abject subservience.

So, to the burning question.

If you need to read out a command line aloud, you need to know how to pronounce it, like this:

But you also need to know how to read out something more dramatic, like:

Do you pronounce the first word as “Sue do”?

After all, the “do” part quite literally means “do”, as in, Ours not to reason why/Ours but to do and die.

Or do you get all metaphorical and treat the whole sudo thing as if it were a game, as in Ludo or Cluedo or Sudoku? Or a fighting style such as Taekwondo or Kendo?

That would make sudo come out more like “soo dough.”

Well, we’re delighted to sort this out for once and for all, now and for ever, until the end of time.

The ONE TRUE WAY to say sudo is as follows:

By the way, if you’re wearing a cool T-shirt, give yourself and all your fellow sysadmins a shout by replying to our tweet below:

Happy #SysAdminDay! Today we're saying 'thanks' to our server room saviours by celebrating the style, self expression and social signalling of the sysadmin.

Yes, we want to see your tees! Get out your phone or turn on your webcam and send us your t-shirts of IT.#TshirtsofIT pic.twitter.com/HSyvMm8Czv

22 comments on “Sysadmins need to know – how DO you pronounce “sudo”?”