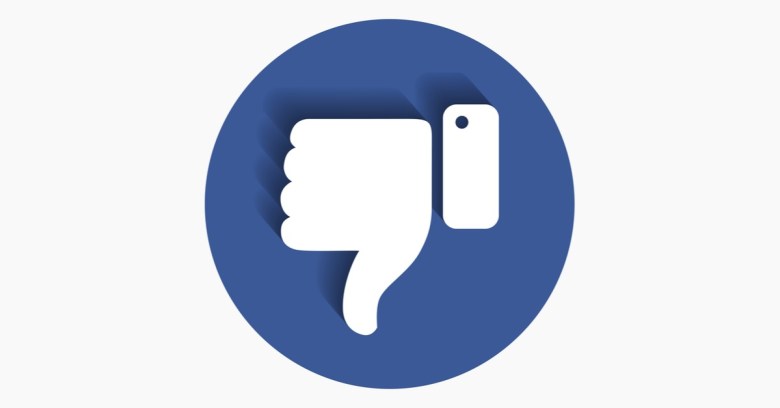 Don’t forget – Facebook is full of chain letter hoaxes, and in spite of what they all breathlessly proclaim in exclamation-cluttered, improperly capitalized and weird-syntax-strewn legalese fiction, copying and pasting them will NOT protect your posts from a fictional Facebook “All Content Is Ours” grab.

Nonetheless, the Facebook hoaxers would have you believe otherwise: yet again, the platform is being flooded with a flim-flam nonsense chain letter, claiming that everything you post on Facebook will suddenly become public – “starting tomorrow!!!”

As is typical, the wording varies a bit, but they’re spouting the same sort of nonsense… 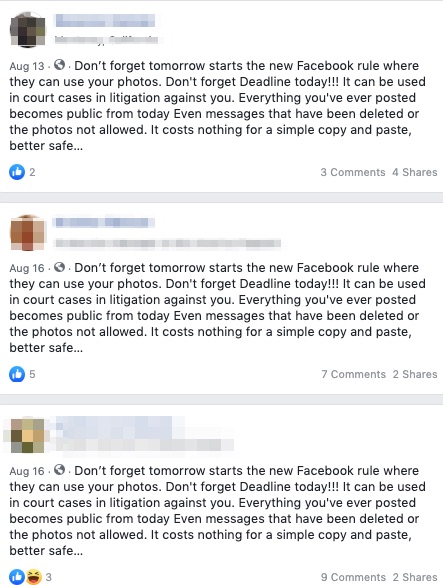 We’ve written about variations on this particular hoax multiple times – back when it crawled out of the primordial ooze in 2012, again in 2015 and then again in 2016.

This is the full text of one variation that’s been spreading this week:

Don’t forget tomorrow starts the new Facebook rule where they can use your photos. Don’t forget Deadline today!!! It can be used in court cases in litigation against you. Everything you’ve ever posted becomes public from today Even messages that have been deleted or the photos not allowed. It costs nothing for a simple copy and paste, better safe than sorry. Channel 13 News talked about the change in Facebook’s privacy policy. I do not give Facebook or any entities associated with Facebook permission to use my pictures, information, messages or posts, both past and future. With this statement, I give notice to Facebook it is strictly forbidden to disclose, copy, distribute, or take any other action against me based on this profile and/or its contents. The content of this profile is private and confidential information. The violation of privacy can be punished by law (UCC 1-308- 1 1 308-103 and the Rome Statute. NOTE: Facebook is now a public entity. All members must post a note like this. If you prefer, you can copy and paste this version. If you do not publish a statement at least once it will be tacitly allowing the use of your photos, as well as the information contained in the profile status updates. FACEBOOK NOR ANYONE ELSE DOES NOT HAVE MY PERMISSION TO SHARE PHOTOS OR MESSAGES

Where do you even start with dissecting this dung beetle ball? I guess the bogosity of the legal claims is as good a place as any…

You can’t copy and paste your way out of ToS

Taking control of your online content is nowhere near as simple as copying and pasting a blob of text onto your Facebook wall. The law simply doesn’t work that way. Using any website to store content or personal details requires compliance with the site’s terms of service. If you want to wade through Facebook’s ToS, here you go.

Before you can use Facebook, you have to accept its legal terms, including its privacy policy and its terms and policies. After you’ve done so, you can’t alter the agreement. Nor can you restrict Facebook’s rights just by citing the Uniform Commercial Code (UCC). Here’s from Snopes’s 2012 debunking, which is still relevant seven years later:

One of the common legal talismans referenced [in the chain letter] is UCC Section 1-308, which has long been popular among conspiracy buffs who incorrectly maintain that citing it above your signature on an instrument will confer upon you the ability to invoke extraordinary legal rights.

Well, what about that Rome Statute?

You’d be wise to question what the heck the Rome Statute actually is. I did, and as far as I can tell, it’s a reference to the Rome Statute of the International Criminal Court, which established four core international crimes: genocide, crimes against humanity, war crimes, and the crime of aggression.

Whether Facebook’s use of your content constitutes any of those crimes is a topic for another day. For today’s hoax debunking, suffice it to say that the “problem” this non-solution is supposed to address doesn’t exist. Facebook isn’t claiming copyright to your personal information, photographs, or other material. Nor has the platform announced any plans that would make all Facebook posts public (even previously deleted ones), regardless of a user’s privacy settings.

At least two of the many times this chain letter has come around, Facebook has reassured users that they…

…own the intellectual property (IP) that is uploaded to the social network, but depending on their privacy and applications settings, users grant the social network ‘a non-exclusive, transferable, sub-licensable, royalty-free, worldwide license to use any IP content that you post on or in connection with Facebook (IP License).’

Furthermore, we can breathe without being reminded

There are plenty of other red flags signifying that this chain letter is bogus, including improper English usage. For example, “Deadline” shouldn’t be capitalized. The proper sentence construction would also include an article, i.e., “Don’t forget Deadline today!!!”, should say, “the deadline.” Finally, regarding the three exclamation points that end that non-sentence???!!! That’s classic hoax usage, trying to amp up your adrenaline so you’ll jump when they snap their spammy fingers.

Copy, Paste and Breathe? We suggest instead that you Report It as Spam, Don’t Post It, Delete It If You Have Posted It, and You Likely Can Breathe Just Fine Without Some Hoaxer Telling You To.