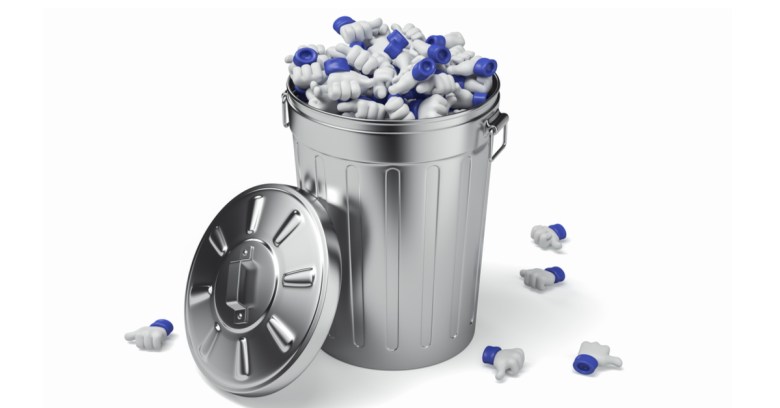 Post-Cambridge Analytica/Cubeyou/et al. privacy-stress disorder, privacy advocates, members of Congress and users told Facebook that we wanted more than the ability to see what data it has on us.

We wanted a Clear History button. We wanted the ability to wipe out the data Facebook has on us – to nuke it to kingdom come. We wanted this many moons ago, and that’s kind of, sort of what Facebook promised us, in May 2018, that we’d be getting – within a “few months.”

Well, it’s 15 months later, and we’re finally getting what Facebook promised: not the ability to nuke all that tracking data to kingdom come, which it never actually intended to create, but rather the ability to “disconnect” data from an individual user’s account.

The browsing history data that Facebook collects on us when we visit other sites will live on, as it won’t be deleted from Facebook’s servers. As privacy experts have pointed out, you won’t be able to delete that data, but you will be getting new ways to control it.

Facebook announced the new set of tools, which it’s calling Off-Facebook Activity and which includes the Clear History feature, on Tuesday.

Facebook Chief Privacy Officer of Policy Erin Egan and Director of Product Management David Baser said in a Facebook newsroom post that the new tools should help to shed light on all the third-party apps, sites, services, and ad platforms that track our web activity via Facebook’s various trackers.

Those trackers include Facebook Pixel: a tiny but powerful snippet of code embedded on many third-party sites that Facebook has lauded as a clever way to serve targeted ads to people, including non-members. Another tool in Facebook’s tracking arsenal is Login with Facebook, which many apps and services use instead of creating their own login tools.

It’s tough for users to keep track of it all, the Facebookers said:

Given that the average person with a smartphone has more than 80 apps and uses about 40 of them every month, it can be really difficult for people to keep track of who has information about them and what it’s used for.

So as of Tuesday, we’ve got Off-Facebook Activity to help. It lets users see a summary of the apps and websites that track you online and report back to Facebook. You can “clear” the information from your account if you want to, Facebook says, which is “another way to give people more transparency and control on Facebook,” along with recent updates to Ad Library, updates to “Why am I seeing this ad?” and the launch of a new feature called “Why am I seeing this post?”.

Using the Clear History tool, you can “disconnect” that data from your Facebook account. Doing so will mean that the company will no longer be able to use that information for targeted ads, including on its other products, such as Instagram or Messenger.

But that won’t stop Facebook from squeezing that data – including your browsing history, search terms, and online purchases – for other business purposes. A spokesperson told Consumer Reports that Facebook may still use the data in analytics reports for other websites, for example, and for providing advertisers with information about the effectiveness of their campaigns.

Even though you won’t be able to entirely wrestle your data out of Facebook’s maw, the Off-Facebook Activity controls are still going to usher in an unprecedented view of the information Facebook collects about us and what tools – Pixel or Login, for example – that it uses to get it, regardless of whether you actually interact with a given entity or not.

Justin Brookman, Consumer Reports’ director of privacy and technology policy, is one of the experts Facebook consulted about the tools as it was developing them over the past year. He said that the new tools aren’t perfect, but at least they’re a step in the right direction – as in, a step away from third-party tracking, which he called “the original sin of the web.”

There are some shortcomings here, but giving consumers the ability to separate that tracking from their real names is a major step in the right direction.

What would make this more of a real leap instead of a baby step: giving users the ability to wipe the slate clean. Brookman:

You should be able to delete this data entirely and stop Facebook from collecting it in the first place.

…which is why there’s still plenty of room and plenty of reason for regulators and lawmakers to take action, he said.

Consumer Reports also spoke with Casey Oppenheim, co-founder of data security firm Disconnect, who had a particularly salient comment: namely, don’t rely on the fox in the hen house to “disconnect” from the hens. It’s our data, and it’s on all of us to protect it. But how many of us ever bother to change our settings?

Facebook isn’t making any changes to what it does with your information by default, and that’s a big deal. Most people don’t log on to Facebook just to monkey around with their settings. Each additional step users have to take makes it less likely that they’ll actually use these tools.

Not much, unless you’re in Ireland, South Korea or Spain. Facebook is gradually introducing Off-Facebook Activity in those countries and plans to keep rolling it out everywhere “over the coming months to help ensure it’s working reliably for everyone.”

Months? Is that Facebook speak for “Over a year?”

Whatever! Why wait? If you want to sharpen your privacy lockdown skills, please do head on over to this walkthrough Naked Security’s Maria Varmazis put together a few months ago.

It’s for those of us who still haven’t joined Team #DeleteFacebook. It’s a nicely comprehensive look at the important settings you can change and behaviors you can implement to lock down your privacy on the social network.