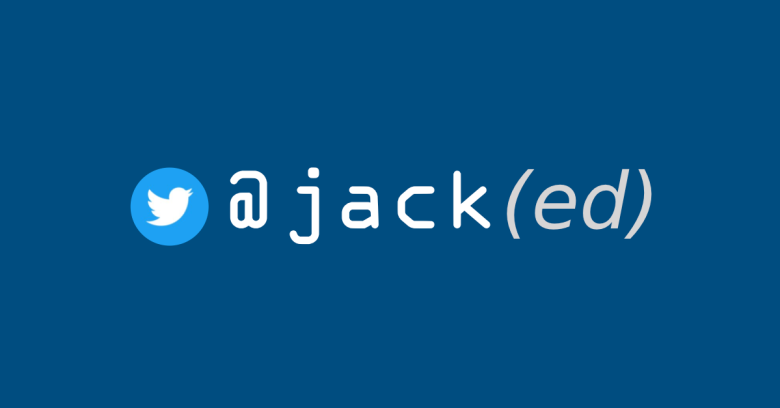 …was none other than @jack, which belongs to Jack Dorsey, the founder and CEO of Twitter itself.

Twitter’s corporate communications account has confirmed that the account got taken over, but says that @jack is “now secure, and there is no indication that Twitter’s systems have been compromised.”

The account is now secure, and there is no indication that Twitter's systems have been compromised.

Twitter Comms later confirmed that the attack was possible because “the phone number associated with the account was compromised”, suggesting that Dorsey may have been the victim of a SIM swap attack.

The phone number associated with the account was compromised due to a security oversight by the mobile provider. This allowed an unauthorized person to compose and send tweets via text message from the phone number. That issue is now resolved.

In a successful SIM swap attack, hackers persuade a mobile phone provider to transfer a victim’s phone number to the hacker’s SIM card, giving the hacker access to the victim’s calls and messages.

Dorsey is rumoured to use a service that allows him to tweet via SMS messages, and this may be what gave the hackers the ability to tweet in his name.

An alternative is that they first cracked his password and then used their access to his phone number to steal a 2FA code sent to it via SMS.

The good news for Twitter users is that this wasn’t a hack on Twitter’s infrastructure and possibly not even a full takeover of the @jack Twitter account (we don’t know if Dorsey was prevented from using his account, only that others gained some ability to abuse it).

We’re not going to reprint any of the tweets or reweets that were sent during the period that a hacking crew going by the nickname Chuckling Squad claimed to have access – if you really must see them, you can find them elsewhere – but they seem to have included a number of racist and anti-semitic taunts, as well as a bomb hoax.

Unsurprisingly, Dorsey is a popular and prolific tweeter himself, with more than 4,000,000 followers and 26,000 tweets, so Twitter’s quick response was commendable – reports suggest that the offensive tweets were removed within 15 minutes of being sighted.

Not everyone in the Twittersphere was complimentary about the response, however, with the very first reply to Twitter’s PR account saying that the company should:

ban him and make him appeal via email, then take a couple days to process it. [W]hy give him special treatment?

you should ban him and make him appeal via email, then take a couple days to process it. why give him special treatment

Anyone who has lost control of any of their own social media accounts – for example due to phishing, a poorly-chosen password or an unlocked phone in the wrong hands – will know that it’s often a stressful exercise to reclaim the account.

To be fair to Twitter, however, establishing that Jack Dorsey was indeed the rightful user of the @jack account would not have been a difficult process, so the company’s super-fast response in this case can hardly be put down to favouritism.