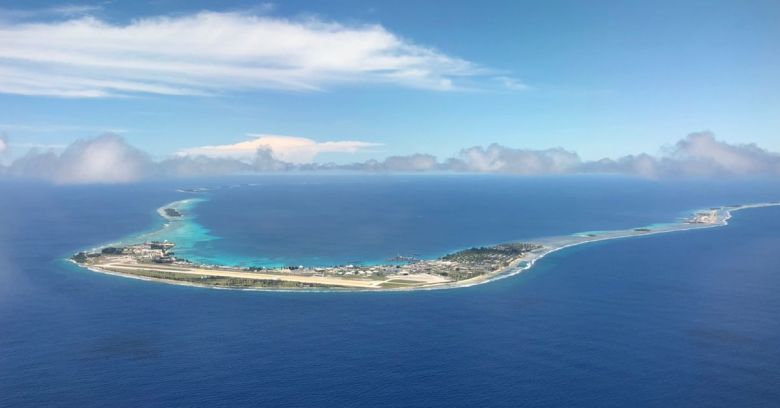 The Republic of the Marshall Islands (RMI) is forging ahead with its plans to issue a blockchain-based, national currency – the Marshallese sovereign (SOV). This is in spite of naysayers (including the US government) predicting that it will be unstable, and/or will crash the local telecom system of this tiny Pacific island nation, and/or that it will be used for money laundering and/or to fund terrorism.

On Wednesday, the digital currency project announced at Coindesk’s Invest: Asia cryptocurrency conference in Singapore that the plan is to do a token pre-sale: it will introduce the SOV through a sale over an extended period of time in what’s being called a Timed Release Monetary Issuance (TRMI).

Once the currency is officially launched – within an estimated 18 to 24 months – the units sold during the pre-sale can be exchanged for SOVs.

Also on Wednesday, Coindesk published a post written by David Paul, the minister in-assistance to the president and environment of the Marshall Islands. Paul said in the post that the currency will be based on blockchain technology, that its growth will be “predetermined and tamper proof,” and that compliance will be “baked into the currency protocol itself,” while maintaining privacy for individuals.

Anyone, regardless of location, can register for the pre-sale on the newly launched website of the SOV Development Foundation: a nonprofit set up to oversee the country’s national digital currency.

So how is a TRMI different from the unregulated fundraising technique with a dodgy reputation called an initial coin offering (ICO)?

ICOs are used by blockchain companies where cyptocurrencies like Bitcoin and Ethereum are used to purchase “tokens” from a startup: if the company takes off, they’ll theoretically be worth something. If not, then you get something along the lines of exit-scamming Prodeum, the fruit and vegetable tracking blockchain figment of some swindler’s imagination that left us with nothing but the word “penis” on its site.

No, RMI has no intention of leaving you stuck with an eggplant, Paul said. He told Coindesk that a primary reason for doing the pre-sale is to get a sense of the levels of liquidity and market interest in the SOV cryptocurrency:

TRMI is really another way of doing an [ICO] but in a more responsible and methodical manner. That’s really the TRMI. You have to look at how to establish liquidity. When you do TRMI, you’re looking at the appetite for the product and how it’s going to [behave] in the markets.

The SOV is a blockchain-based cryptocurrency that will be circulated and operated by the RMI government and will be used as a medium-of-exchange along with the US dollar.

Imagine for a moment that you’re in the government of a tiny island nation.

With 29 coral atolls comprising 1,156 individual islands and islets and peopled by something like 53,158 inhabitants, you’re facing a number of worries: rising seas due to global warming, being cut off from the rest of the world financially, facing the pullout of the only bank that still cashes your people’s paychecks or conducts international money transfers, and a population that’s been poisoned by fallout from 67 US nuclear tests.

That’s The Marshall Islands, and it’s why, in 2018, it voted to stop begging for foreign aid by launching its own cryptocurrency.

As Bloomberg tells it, the US Treasury was not pleased, and its leaders didn’t mince words.

“I don’t like it. I will never support it,” Treasury Assistant Secretary for Terrorist Financing Marshall Billingslea reportedly said when he kicked off a meeting with Marshallese representatives who’d traveled to Washington for the 2018 annual meeting of the International Monetary Fund and the World Bank.

The concerns of the US, along with the international banking community: What if the price of the SOV, issued by the RMI government and built on a specially developed blockchain – is so volatile that it makes it impossible to use in the real world?

What if it crashes the local telecom system – one that already suffers frequent outages?

What if it’s used for money laundering or to finance terrorism? The RMI is already seen as an iffy place by the US Department of State, which deemed it a Jurisdiction of Concern in its 2016 International Narcotics Control Strategy Report (INCSR). The report found that in spite of a low rate of domestic crime, “suspicious transaction reports” suggest “tax evasion, smuggling, prostitution, embezzlement, counterfeit financial instruments, check fraud, and narcotics trafficking on the islands could be predicate offenses for money laundering.”

That, in fact, is why First Hawaiian Bank told The Marshall Islands that it was going to close down services: because of a stricter regulatory environment, due diligence has been heightened on customers, and that makes compliance procedures more costly: costly enough that maintaining a correspondent banking relationship (CBR) isn’t worth it. Around the world, CBRs are similarly being withdrawn, especially in the Caribbean, Middle East and North Africa. First Hawaiian has reportedly said that it would wait until RMI has another CBR set up, though it hasn’t welcomed the notion of the SOV as a sensible way forward for the nation.

Paul said in his essay that blockchain has “opened up a world of opportunity” for small nations such as RMI.

Relying on traditional fiat currency, the Marshall Islands has only fragile links to the wider world of international finance, and compliance is extremely resource intensive. Many of our citizens send or receive money using remittance services, paying fees of up to 10% per transaction. Even simple things like acquiring and installing ATMs become complicated when you’re in the middle of the Pacific Ocean!

This move is going to save the nation all sorts of expense, he said. Not only are blockchain transactions “fast, simple, and cheap,” the only infrastructure needed is the network itself. There’s no need to create a central bank, and no need to print and process real money.

It’s also going to save on the burden of compliance, he said, enabling the RMI to actually contribute to the fight against money laundering and terrorism financing:

Post 9/11, money laundering and financing of terrorism are major threats that the global community is fighting together. But without our own currency, and beholden to existing systems, it is hard for us to contribute much to this fight beyond basic compliance. With a digital currency based on blockchain, we can automate much of the compliance burden and take a proactive role on the international stage.

Paul said that the SOV will close down the “loopholes” that terrorists and crooks are now exploiting:

Every individual using SOV must be identified by an approved verifier of their choice, such as a bank or an exchange. This will close the secrecy and anonymity loopholes exploited by criminals and terrorists.

…while still maintaining privacy of individual users, he emphasized:

It is crucial that individual users should have a reasonable expectation of privacy – specifically, the ability to choose when to disclose your information, what exactly to share, and with whom. We are committed to providing this privacy with SOV.

Welcome to the blockchain club

The RMI’s SOV plan is just one of a slew of other digital currencies that are in the works. In June 2019, Facebook announced its own Libra cryptocurrency, for one.

China’s central bank is also gearing up to launch a state-backed cryptocurrency in the coming months – one that it’s reportedly going to issue to Alibaba, Tencent and a handful of other financial giants and financial technology players.

Even Bank of England governor Mark Carney recently suggested that the US dollar could be swapped out by a global digital alternative, saying that its dominance has resulted in a savings glut, with a decade of low inflation and ultra-low interest rates.

4 comments on “Tiny Pacific nation forges ahead with national cryptocurrency”