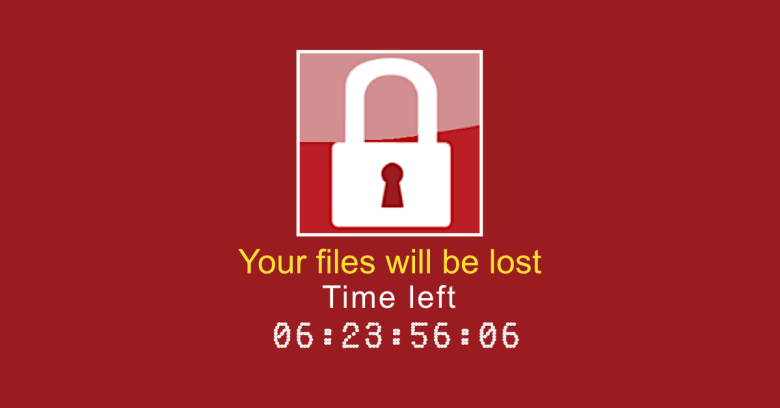 That’s the infamous self-spreading ransomware attack that stormed the world in May 2017.

WannaCry was an unusual strain of ransomware for two main reasons.

Unlike most ransomware we’ve seen in the past 30 years (yes, it really is that long!) WannaCry was a computer virus, or more precisely a self-spreading worm, meaning that it replicated all by itself, finding new victims, breaking in and launching on the next computer automatically.

WannaCry broke in across the internet, jumping from network to network and company to company using an exploit – a security bug in Windows that allowed the virus to poke its way in without needing a username or a password.

And not just any exploit – WannaCry used an attack called ETERNALBLUE that was allegedly stolen from the US National Security Agency by a hacking crew known as Shadow Brokers .

The good news is that, even back at the time that WannaCry burst onto the internet, a patch to fix the ETERNALBLUE security hole was available, issued two months previously by Microsoft as part of the March 2017 Patch Tuesday update.

If you’d patched within the past two months, you were largely immune to WannaCry, and could therefore stand down from red alert.

Even if you detected network attacks coming from existing, unpatched, infected victims, those ETERNALBLUE probes would have bounced harmlessly off your up-to-date devices.

Of course, not everyone had patched within that two month window, and so the malware spread far and fast, demanding $300 per infected computer from something like 200,000 victims in short order.

Not everyone has patched even now, more than two years later, and WannaCry is not only still alive (and ignoring the kill switch that was designed to stop it), but possibly more alive than ever.

Sophos experts Peter Mackenzie, Fraser Howard and Anton Kalinin have just published a must-read paper that will tell you why, and how. 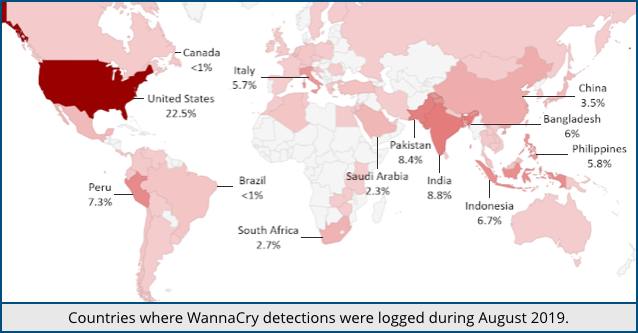 Fortunately, although we’re still seeing huge amounts of WannaCry activity, we aren’t seeing many people actually getting their data scrambled by it.

And because people who are infected aren’t themselves visibly being affected by unwanted encryption and ransom demands, they don’t realise they’re spreading copies of it.

But how on earth can a destructive virus more than two years old, one that was patched against even before it first appeared, continue to spread like crazy?

And how come it’s still alive but no longer drawing attention to itself by leaving a sea of scrambled files and ransom demands in its wake?

More importantly, what can we do to stop it now?

The data that our experts analyse in their report is fascinating:

…is because the file-scrambling part of the malware is corrupted.

In other words, if you haven’t patched, and you do get infected, but you don’t get your files ruined, you got lucky.

You were saved by accident rather than by design – from WannaCry, that is, but who knows who or what else has been wandering round your network in the more than two years since you last patched?

Read the paper and learn what what to do – there are apparently millions of people in our midst who desperately need our help and advice, for the greater good of all.

5 comments on “WannaCry – the worm that just won’t die”