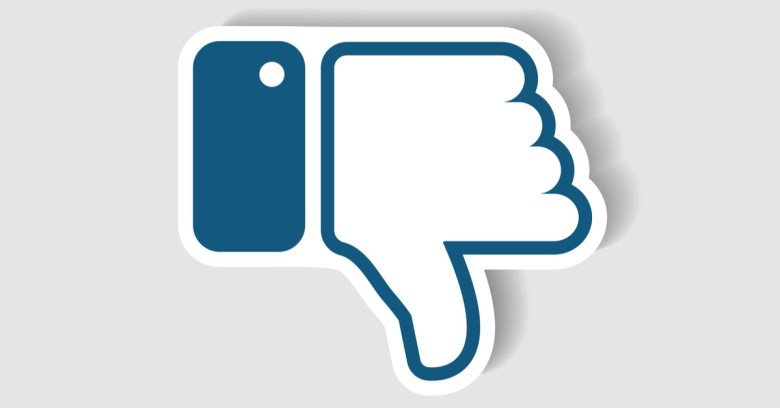 Cast your mind back to 2014, and you might recall Mark Zuckerberg mulling the public’s desire to have a “dislike” button on Facebook.

During a public Q&A, the CEO presented button semantics as being something like a Marvel comics battle between good and evil, with the Like button presumably being, to his mind, a “force for good”:

There’s something that’s just so simple about the ‘like’ button’ … but giving people more ways of expressing more emotions would be powerful. We need to figure out the right way to do it so it ends up being a force for good, not a force for bad and demeaning the posts that people are putting out there.

But now, as a mounting body of research points to the number of content Likes – or lack thereof – negatively influencing some users’ self-esteem, it may be time to question whether the Like button might have turned out to be a force for bad.

Recent studies have linked increased depression, poor sleeping habits, and unhealthy body image in children and teens with higher use of social media and digital devices.

To address the mess they’ve made, at this point, Instagram – which a 2017 study found to be the worst social media app for young people’s mental health – and Facebook is taking a serious look at the possibility of doing away with Likes.

In April 2019, Instagram announced that it was running a test in Canada: it was hiding Like counts on some users’ photos and videos as an experiment to try to lessen competitiveness on the platform.

The idea: to make us feel less envious, less ashamed, and more focused on self-expression rather than like we’re vying in a personality competition. It’s all about getting people to focus on the content they share, not the likes, a spokesperson said when news about the test was announced at F8, Facebook’s annual developers conference:

We are testing this because we want your followers to focus on the photos and videos you share, not how many likes they get.

And now, three months later, Facebook itself has begun its own test: it’s removing public visibility of Like, reaction and video view counts from people’s posts and ads across Facebook. The test is only happening in Australia: Facebook told Engadget that it hasn’t decided whether to expand the test to other places in the future. Before it decides what to do next, it wants to see how the Australia test goes, Engadget reports.

While Instagram hasn’t shared the results of its Canada test yet, it can’t have gone all that poorly. In July, it expanded the Like hiding to select users in six additional countries: Australia, Brazil, Ireland, Italy, Japan and New Zealand.

We’re currently running a test that hides the total number of likes and video views for some people in the following countries:

The users selected to be a part of the experiment were presented with a banner notifying them about the test. This is what is says:

We want your followers to focus on what you share, not how many likes your posts get. During this test, only you will be able to see the total number of likes on your posts.

While likes get submerged from public view, they’re still viewable to the users in the test. Instagram shared a sample image with a line below the post that reads “Liked by [user] and others.”

Are these moves signaling an end to the era of social media Likes? If so, will anybody miss them?

Yes. There are influencers who’ve made careers out of posting content that racks up copious Likes. CNN Business points to one such, Sam McAllister: a 23-year-old photographer whose gorgeous photos pull in thousands of Likes. He doesn’t have a huge number of followers, but with well-Liked photos like this aerial view of Venice canals, he’s managed to get paying campaigns for companies such as airline Aer Lingus and an energy drink maker.

The loss of Likes could be a game-changer for talented newcomers who don’t already have big followings. McAllister told CNN Business that it might not work out well for him:

The fact that my posts are massively engaged has paid off for me. My main concern right now is that the number of followers a user has now defaults to be the main metric.

Another group that stands to lose out if Likes die off: companies that make millions by selling fake likes, followers and retweets to celebrities, businesses or anyone who wants to puff themselves up online.

One thing’s for sure: If Likes get to the chopping block, it’s going to be a lot easier to feel for content creators like McAllister. But in the best possible case scenario, there will be ample benefits to offset that: less competition, less posts removed by users too embarrassed to leave them up in the face of scanty Likes, less ruined self-esteem.

Unfortunately, there are plenty of ways to cyberbully on social media. There are many ways to ruin people’s self esteem besides not Liking their posts. But let’s give credit where credit’s due: the platforms are trying to fix at least one aspect of the tangled milieu they created.

After working so hard to get us addicted to the dopamine hits those Likes have been injecting for lo, these 10 years, it’s the least they can do.

I say thumbs-down on the Like button. Readers, are you with me?

6 comments on “Is the era of social media Likes over?”