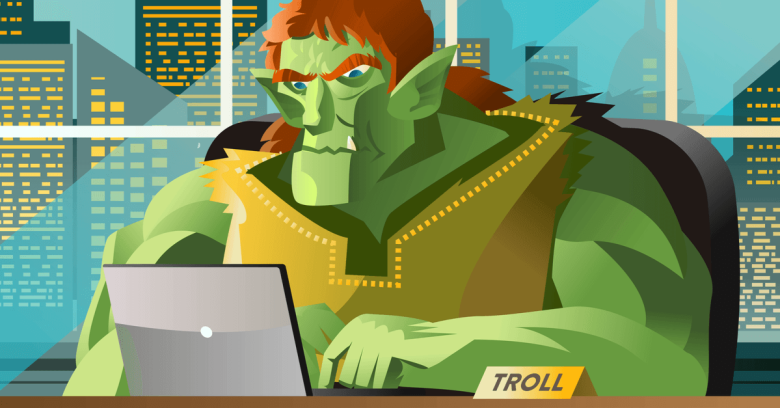 Investigative journalist Katarzyna Pruszkiewicz spent six months working undercover, creating fake social media accounts and sending them out to troll on either side of the political spectrum, for Cat@Net – a troll farm in Wroclaw, Poland that calls itself an “ePR firm.”

We already have some insight into the inside of a disinformation factory: A few months ago, we heard an account from a fake news writer who says she saved her sanity with the rationale of “If people are stupid enough to believe this stuff…”

But Pruszkiewicz’s findings paint an even more detailed picture of how fake accounts are being used by private firms to influence political discourse, by fooling unsuspecting voters and consumers into thinking that they’re chatting with actual people.

Last week, her account was published by Investigate Europe – a consortium of European investigative reporters – as well as by its media partners.

Together with her troll colleagues, the undercover journalist managed almost 200 fake accounts on Facebook, Twitter and Instagram, has written thousands of messages and comments, has promoted her clients’ products, has trolled their competitors, and has run hidden support campaigns for, and smear campaigns against, politicians.

The Guardian gave a vivid example of how the fake accounts build fake personas that engage in fake discussions: in this particular case, Cat@Net workers fabricated two conservative activists to sneer at Poland’s divided liberal leftwing.

In this conversation, the fake accounts discuss a newspaper story about a former campaign adviser to Barack Obama and Emmanuel Macron coming to Warsaw to address a group of liberal activists:

Girl from Żoliborz, a self-described “traditionalist”: I burst out laughing!
Magda Rostocka, whose profile says she’s “left-handed with her heart on the right”: The opposition has nothing to offer. That’s why they use nonsense to pull the wool over people’s eyes.

They’re both fakes. But “Girl from Żoliborz” was a double fake: behind the bogus persona was Pruszkiewicz, who’d penetrated the firm after responding to a job posting from Cat@Net.

The firm was looking for a “telecommuter” – somebody who could work at home, had some journalistic experience, and could “build a positive image of our customers on social media and on the internet.”

As Investigate Europe tells it, Cat@Net’s customers include “large and small companies […] as well as other entities, including public administration institutions and private individuals.” The firm was unaware that Pruszkiewicz was an investigative journalist, since she had a “clean” online record, with no profile to identify her as such.

Her marching orders: create a credible, convincing, and fake Twitter account and profile. Put some flesh on that imaginary person’s bones, her boss told her. She did, bragging online about what she cooked, posting a picture of her new nail polish, and adding a photo of the university that her fake person purportedly attends. She posted pictures of flowers, her cat, and her favorite chocolate.

“After all, my life is not only politics,” Pruszkiewicz explains about the persona she crafted.

Keep it controversial, and make the social and political posts popular, the Cat@Net team coached her. Some of the things her fake account accordingly posted about:

April is the time of a nationwide teachers’ strike in Poland; they demand higher pay. The ruling party and their public radio and TV propaganda portray teachers as parasites, losers and sly dogs. My fictitious account chooses the #notsupportingteachersstrike hashtag. I write that teachers are holding students hostage; they are selfish and that their demands are unjustified.

In the coming weeks I lash out at the LGBT movement. I say that I fell asleep while watching ‘Tell No One’, a documentary about child sex abuse in Poland’s Roman Catholic Church.

Two men kissing on Eurovision? That’s outrageous! How can you expose children to such content?

Those kind of posts impressed her bosses. By June 2019, after her 3-month troll trial, Pruszkiewicz had become a trusted troll. She was invited to a private Cat@Net Slack channel called “Kulawa Rebelia” – which translates as “Lame Rebellion” or “Rebellion on Crutches.”

The name has to do with the fact that most of Cat@Net’s employees are believed to be disabled, which enables the company to get public subsidies from Poland’s National Disabled Rehabilitation Fund. According to the Reporters Foundation, the company has received about 1.5 million zloty (USD $388,044) from the fund since November 2015.

Pruszkiewicz describes the chat room as “the company’s engine room.”

Every day people with different degrees of disability, including those using wheelchairs, meet here and talk. All internet operations are controlled by two managers who send trolls to react under specific posts or on specific Twitter accounts. The managers decide what to write and publish.

Rising up in the troll ranks

By September 2019, Pruszkiewicz had done so well at her trolling, she was promoted. Her new duties included managing a group of trolls and working with the copywriters who pre-formulate opinions and comments for the trolls. She described how she also helped Cat@Net document results for its clients:

As a manager, I have to collect all comments in one Excel file and send reports to my superiors on a daily, weekly and monthly basis. By reporting the activities of troll accounts, I have to show them that the tasks commissioned are being implemented.

In October, Investigate Europe, Reporters Foundation and Pruszkiewicz confronted Cat@Net and the politicians allegedly involved in its campaigns.

When they emailed Cat@Net’s CEO to ask him about troll profiles and his connection to Bartłomiej Misiewicz – a close aid to the Polish defense minister who was arrested for alleged corruption in a January 2019 raid on Cat@Net’s headquarters that prompted the journalists’ investigation – the CEO didn’t respond. But within a few hours of the email being sent, the internal employee chat groups were deleted.

On Friday, Cat@Net issued a statement in response to the journalists’ reports. It denies being a troll farm, describing its business as the outsourcing of marketing activities and saying that it adheres to the same rules as other agencies of this kind. The firm…

…strongly den[ies] that the influencer accounts kept by the company’s employees use hate, hate speech or misinformation.

How the troll farms compare

Some of Cat@Net’s alleged tactics resemble those used by Russia and its infamous troll factory.

That factory, which goes by the name of the Internet Research Agency (IRA), set loose both right-wing and left-wing trolls. There were elements of flame-fanning on either side of the political divide, similar to how Cat@Net trolls reportedly worked both the left-wing and the right-wing on behalf of its clients.

Fomenting any and all political sides has become a standard modus operandi of disinformation/media manipulation efforts. Tactics aside, when it comes to motivation, it might be illustrative to compare Cat@Net’s alleged activities and those that take place in the thriving fake news manufacturing city of Veles, in Macedonia, where hundreds of producers of fake US news have established a profitable fake-news industry based in the small city.

That’s where that “If they’re stupid enough…” fake news writer hails from.

In one news report, a CNN reporter talked to one such producer who claimed to be making as much as $2,000 to $2,500 per day off of his fake news site, which had around a million Facebook likes at the time. To get around account shutdowns, the producer said, he’d buy Facebook accounts off of kids for two euros. That’s more than those kids ever had, he said.

For firms like these, it’s all about the clicks, which is all about the money, and that translates further into being able to demonstrate it can deliver clicks and engagement for paying clients.

But the Cat@Net investigation also uncovered a slew of what sounds like favors being done for politicians and industries.

The Guardian details one such campaign, which sought to influence what kind of fighter jet the Polish government spent its zloty on:

The accounts were used to undermine public support for the Polish government’s decision to place a major order with the American contractor Lockheed Martin for the F-35 fighter jet, promoting instead the Eurofighter Typhoon. […] Cat@Net employees were reminded by their managers that “the F-35 is our enemy number one” but “don’t be too pushy with the Eurofighter, otherwise they will know they are being trolled”.

Political favors, corruption, money: these are hard to disentangle. They’re all part of the same ball of wax. All those motivations well might also be at play in the fake-news industry that fake-news writers are part of.