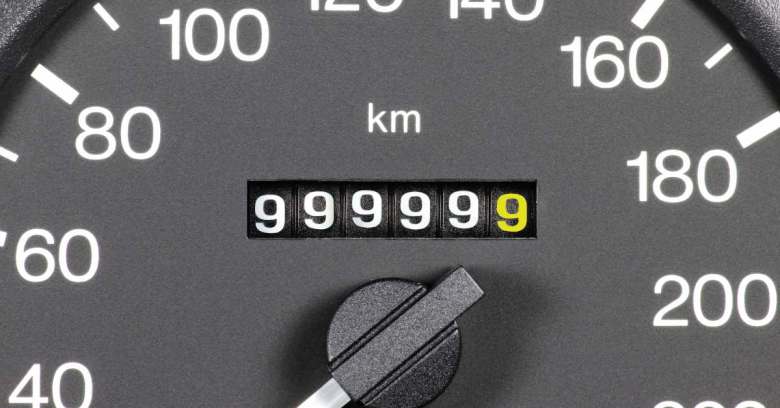 We recently wrote up a fascinatingly scary warning about server hard drives that might abruptly and utterly fail.

HPE warned its customers that a wide variety of its solid state disks (SSDs) needed an urgent firmware update to prevent them sailing over the edge of the earth into oblivion.

The disks weren’t badly manufactured; they weren’t going to fail for reasons of physics, electronics or electromagentism; and the disk circuitry would remain intact afterwards.

In fact, as far as we can tell, the data actually stored in the chips on the failed devices would still be there…

The failure was, in fact, down to a bug in the firmware of the drive. (Firmware is a fancy name for software that’s permanently stored in hardware so that the hardware can boot up by itself.)

Simply put, after approximately 32,000 hours of operation – a little under four years – the device firmware would crash, and refuse to initialise again.

Not only would the crashed firmware prevent the drive starting up, it seems that the bug would also prevent the firmware from accepting an update to fix the bug.

To answer that question properly, and to avoid this sort of bug in future, we need to investigate how computers count.

Let’s start by looking at how we ourselves count, or, more precisely, how we account, for time.

In the West, we generally keep track of years using the Christian era, which is currently at AD 2019.

To represent the year exactly, therefore, you need at least four digits.

But you have to be careful if you have fewer than four digits at your disposal, because you can no longer be precise about the year – all you can do is come up with some sort of approximation.

As it happens, we do that sort of thing rather often, using two digits to denote a specific year, and sometimes we get away with it.

But sometimes we risk ambiguity when we aren’t precise about the year.

If you were to mention ‘The 20s’, it might not be clear at all whether you were referring to the tumultuous decade right after the First World War, or to the who-knows-how-tumultuous-it-will-be decade that will start in just a few weeks time.

The ‘millennium bug’, often ironically squeezed into the acronym Y2K, short for ‘Year 2000 bug’, was an example of this sort of problem.

The Y2K problem arose because of the once-widespread programming practice of using just two characters for the year, instead of four, in order to to save storage space.

That’s because 99+1 = 100, which has three digits, and therefore can’t be squeezed back into two characters.

The number overflows its storage space, so the extra ‘carry one’ digit at the left hand end gets lost, along with 100 years.

As far as we can tell, a very similar sort of numeric overflow – a latter-day Y2K bug, if you like – was what caused the HPE storage device flaw.

We’re making this assumption because the HPE security notification said that the failure happened when the total count of power-on hours for the device reached exactly 32,768.

Programmers will recognise that number at once, because it’s a power of two – in fact, it’s fifteen 2s multiplied together, or 215.

In regular life, however, we usually count in tens, using what’s called base 10.

And each digit position carries 10 times more numeric weight as we move from right to left in the number.

Curiously, the notation we know as Arabic numerals in the West came to us from India via the Arabic world, where they were known as Indian numerals. They’re written left-to-right because that’s how the Indian mathematicians did it, and that’s the practice the Arabian mathematicians adopted. Indeed, written Arabic uses left-to-right numbers to this day, even though Arabic text runs from right to left.

But computers almost always use base 2, also known as binary, because a counting system with just two states for each ‘digit’ is much easier to implement in electronic circuitry than a system with 10 different states.

These two-state values, denoted with the symbols 0 and 1, are known simply as ‘bits’, short for ‘binary digits’. 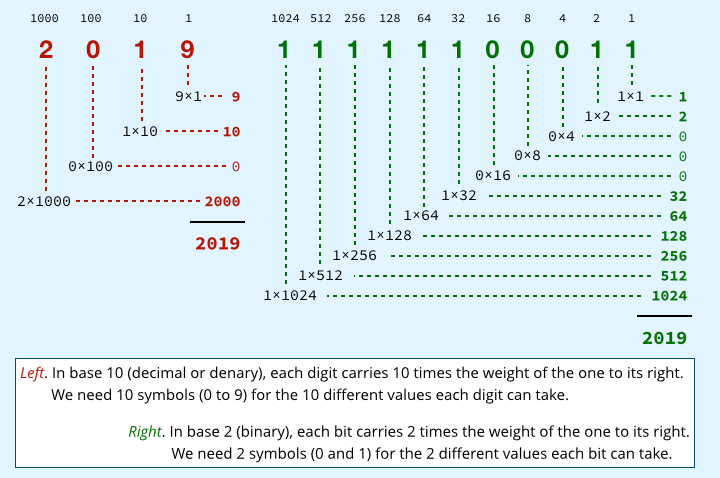 Additionally, almost all modern computers are designed to perform their basic operations, including arithmetical calculations, on 8 bits at a time (a memory quantity usually referred to as a byte or an octet), or on some doubling of 8 bits.

Modern Intel processors, for example, can perform calculations on 8, 16, 32 or 64 bits at a time.

So, in programming languages such as C, you can choose between various different sizes, or precisions, of integer values when you want to work with numbers.

This allows you to trade off precision (how many different values each number can represent) with memory usage (the number of bytes needed to store each number, even if it’s zero). 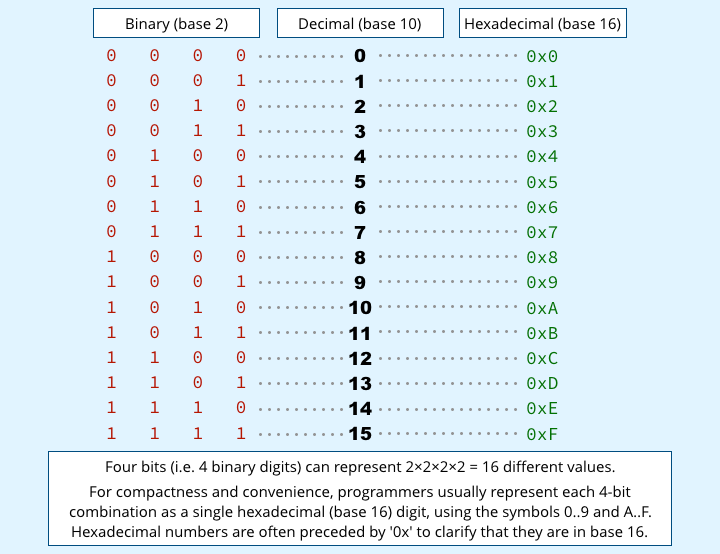 The 16-bit number 0xFFFF is a bit like the decimal number 99 in the millennium bug – when all your digit positions are already maxed out, adding one to the number causes a ‘carry one’ to happen at every stage of the addition, including at the left-hand end, producing a result of 0x10000 (65,536 in decimal).

Computers don’t usually do 15-bit arithmetic, but most processors let you choose between working with unsigned and signed 16-bit values.

When you try to calculate 32,767+1, you wrap around from the end of the range back to the lowest number in the range, which for signed numbers is -32,768.

Not only do you jump backwards by a total distance of 65,535 instead of going forwards by 1, you end up flipping the sign of the number from positive to negative as well.

It’s therefore a good guess that HPE’s firmware bug was caused by a programmer using a signed 16-bit memory storage size (in C jargon, signed short int) – perhaps trying to be parsimonious with memory – under the misguided assumption that 16 bits would ‘be big enough’.

If the code were counting the power-on time of the device in days, rather than hours, the programmer would almost certainly have got away with it, because 32,767 days is nearly 90 years.

Today’s SSDs will almost certainly have failed by then of their own accord, or be long retired on account of being too small, so the firmware would never be active long enough to trigger the bug.

On the other hand, if the code were counting in minutes or seconds, then the programmer would almost certainly have spotted the fault during testing (32,767 minutes is a little over three weeks, and 32,767 seconds is only 9 hours).

Sadly, counting in hours using a signed 16-bit number – assuming no one questioned your choice during a code review – might easily get you through initial testing and the prototype stage, and out into production…

…leaving your customers to encounter the overflow problem in real life instead.

Exactly when each customer would run out of hours would depend on how long each device sat on the shelf unused before it was purchased, and how much each server was turned on.

That would make the cause of at least the first few failures hard to pin down.

Why a catastrophic failure?

What still isn’t obvious is how a simple numeric overflow like this could cause such catastrophic failure.

After all, even if the programmer had used a 32-bit signed integer, which would last for 231-1 hours (an astonishing quarter of a million years), they wouldn’t – or shouldn’t – have written their code to fail abruptly, permanently and without notice if the hour count went haywire.

Sure, it would be confusing to see a storage device suddenly having a Back to the Future moment and reporting that it’s been turned on for a negative number of hours…

…but it’s not obvious why a counting error of that sort would not only stop the drive working, but also prevent it being reflashed with new firmware to fix the counting error.

Unfortunately, it can, and it does – when your counting goes awry inside your software, even a single out-of-range number can have a devastating outcome if you don’t take the trouble to detect and deal with weird and unexpected values.

We can’t give a definitive answer about what went wrong in the HPE case without seeing the offending source code, but we can usefully speculate.

If a negative number of power-on hours is never supposed to happen – and it shouldn’t, because time can’t run backwards – then the code may never have been tested to see how it behaves when an ‘impossible’ value comes along.

Or the code might use an ‘impossible’ value, such as a negative timestamp, as some sort of error flag that causes the program to terminate when something bad happens.

If so, then reaching 32,768 hours of trouble-free usage would accidentally trigger an error that hadn’t happened – an error that would continue forever once the counter overflowed backwards.

Or the code might have used the count of hours as an index into a memory array to decide what sort of status message to use.

That number might be used as an index into a table to retrieve one of 16 different messages, and because it’s impossible to get a number outside the range 0..15 when dividing an unsigned integer by 16, the programmer wouldn’t need to check whether the result was out of range.

What the programmer assumed would be a safe memory index would suddenly read from the wrong part of memory – what’s known as a buffer overflow (or, in this case, a buffer underflow).

The bottom line here is that even trivial-sounding faults in arithmetical calculations can have ruinous consequences on software, causing it to crash or hang unrecoverably.

Oh, and if you have any HPE storage devices, check if they’re on HPE’s list of affected products and get the firmware update right now – it’ll be too late to patch after the event!