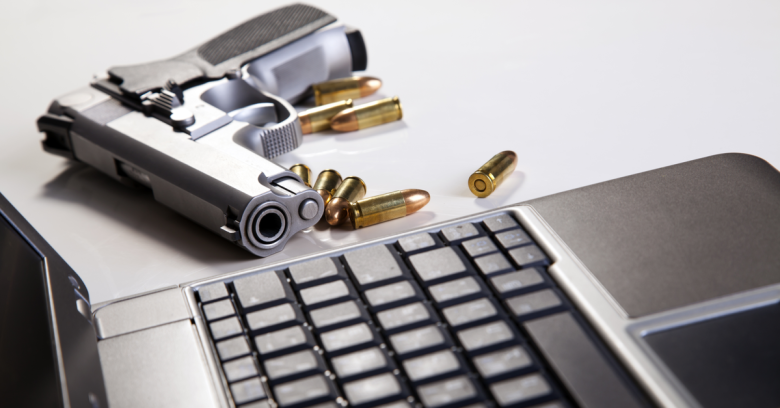 Remember the social media influencer who decided that the best way to get the valuable domain doitforstate.com would be by hiring his cousin to “influence” the rightful owner’s head with a pistol-whipping?

He’s been sentenced to 14 years in federal prison on one count of conspiracy to interfere with commerce by force, threats, and violence, the US Attorney’s Office for the Northern District of Iowa announced on Monday.

The epic, violent domain transfer #FAIL involved not only pistol-whipping, but also tasering, and demanding at gunpoint the transfer of doitforstate.com – a site devoted to content concerned with the beer-guzzling and butt-ogling of college students.

The domain-demanding burglar, Sherman Hopkins, Jr., of Cedar Rapids, Iowa, had been hired by his cousin to pull off the domain-transfer-by-force.

Hopkins – who got shot multiple times in the chest during his botched domain grab – was sentenced to a maximum prison sentence of 20 years in 2018. The cousin who hired him, 27-year-old Rossi “Polo” Lorathio Adams II, also from Cedar Rapids, was the one who was sentenced on Monday.

As prosecutors have described during the trials of the cousins, Adams founded a social company called “State Snaps” while he was a student at Iowa State University in 2015. Similar to Do It For State, State Snaps – and its Snapchat, Instagram and Twitter feeds – showed great gusto for boob-, butt-, beer-, setting-things-on-fire-, drug- and arrows-shot-into-the-groin-related content, as well as for depictions of drinking beer from women’s butts.

The State Snaps domain, still up and running and replete with multiple derriere-as-beer-stein videos, is DoIt4State. Both Adams’s followers and those of DoItForState.com – a domain that hasn’t returned a site since 2015 – used the slogan “Do It For State!”

For two years, between 2015 and 2017, Adams tried to purchase the rival internet domain from the guy who owned it: Cedar Rapids resident Ethan Deyo. He’s the one who wound up getting pistol-whipped in the attempted domain robbery.

Prosecutors say that in June 2017, Adams enlisted his cousin, Hopkins, to break into Deyo’s home and force him at gunpoint to transfer doitforstate.com to Adams. Hopkins, a convicted felon, was living in a homeless shelter at the time.

On 21 June 2017, Adams drove Hopkins to Deyo’s house and gave Hopkins a demand note with instructions for transferring the domain to Adams’ GoDaddy account. When Hopkins broke into Deyo’s home in Cedar Rapids, Iowa, he was carrying a mobile phone, a stolen gun, and a taser. He was clad in burglar wear: a hat, pantyhose on his head, and dark sunglasses.

Deyo was upstairs when he heard Hopkins break in. He looked over the railing and saw that Hopkins had a gun. Hopkins shouted at Deyo, who ran into a bedroom upstairs and shut the door, leaning against it to keep Hopkins out. Hopkins went upstairs and kicked it open.

Hopkins then grabbed Deyo and forced him into the home office, to turn on his computer and to connect to the internet. Then, Hopkins pulled out the instructions on how to switch GoDaddy accounts for a domain name that Adams had given him. He held a gun to Deyo’s head and told him to follow the directions, taking his victim’s mobile phone and throwing it away so he couldn’t call for help.

Besides his sentence of 168 months prison time, Adams was also ordered to pay nearly $9,000 in restitution, prosecution costs that amounted to $3,957.45, and $22,000 in attorney fees. The DOJ said that Adams had court-appointed counsel during trial, but he didn’t need it: the Court found out that he was earning “significant” money while the case was pending. There’s no parole in the federal prison system, so he’ll have the full 14 years to mull his violent internet business strategies.

He’ll hopefully be spending some of that time – and the three years of supervised release that will follow – thanking his lucky stars that neither his cousin nor his target died during his ill-conceived domain grab.