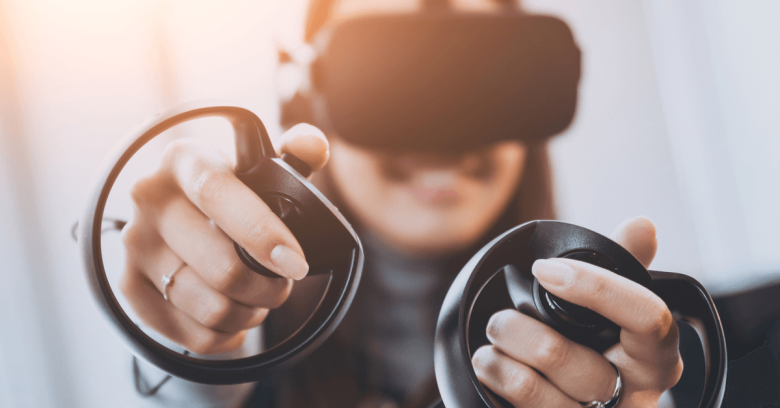 It’s jam-packed with traps, obstacles, Nullmen zombies who’ll attack you on sight, and now, thanks to the zuckerborgians, you’re going to be stalked: followed right out of the virtual experience and into real life… by ADS!!!!!!

Facebook picked up the hot-hot-hot VR startup Oculus in 2014 for $2 billion: $400 million in cash and 23.1 million shares of Facebook stock.

It came fresh off the company’s $19 billion purchase of WhatsApp – a buy that made for a more logical fit into Facebook’s messaging space. But VR? How does that fit in with social media?

CEO Mark Zuckerberg at the time: VR is one of the “platforms of tomorrow!”:

Mobile is the platform of today, and now we’re also getting ready for the platforms of tomorrow. Oculus has the chance to create the most social platform ever, and change the way we work, play and communicate.

…and it now has the chance to change how Facebook tracks you, as it turns out.

On Wednesday, Facebook’s Oculus VR division announced new features that will help players to connect with friends, whether it’s via chat, organizing multiplayer games, live streaming to Facebook, throwing parties for any of your Oculus friends, and more.

Here’s the thing, Facebook Oculus said: in order to bring you all that VR community building, and to improve what ads we show you when you’re logged into Facebook, we’re going to be tracking what you do in Oculus.

As part of these changes, Facebook will now use information about your Oculus activity, like which apps you use, to help provide these new social features and more relevant content, including ads.

What kind of ads? Facebook gave some examples, including “Oculus Events you might like to attend or ads for VR apps available on the Oculus Store.”

The company says this “won’t affect your on-device data,” which, as UploadVR has reported, is the location where Facebook says it stores 3D maps of your environment.

By “3D maps of your environment”, Facebook is referring to the coordinates that help to locate a headset and controllers in a known space so Oculus VR games “can work and keep you safe.”

In September, following a dust-up about Oculus testers’ homes – including views into bedrooms – being captured in screenshots that were then sent back to Facebook headquarters, the company sent this emailed statement to UploadVR, to clarify what data it collects and retains:

We don’t collect and store images or 3D maps of your environment on our servers today – images are not stored anywhere, and 3D maps are stored locally on the headset [for Quest] and on your local PC, where you have access to delete it [for Rift S]. That said, we’ll notify consumers if this information is required for VR experiences we provide on Quest/Rift S in the future.

Nothing to worry about, then? …besides this coming from the privacy-challenged, user data-bartering Facebook, that is?

Oculus has provided this FAQ to give users an idea of what this all entails. It also notes that if users choose not to log into Facebook on Oculus, it won’t share data with Facebook that would allow third parties to target ads at you based on your use of the Oculus Platform.

Oculus still may collect your information for its own advertising purposes, though.

But as an Oculus spokesperson told PC Mag, you will not see ads during gameplay. At least, that is, “not currently.”

People who log into Facebook on the Oculus platform will see more targeted ads across Facebook products, however please note, we do not currently display ads in Oculus VR headsets.

If you want to tweak how Facebook targets ads at you based on your activity on and off the platform, here’s where to go.