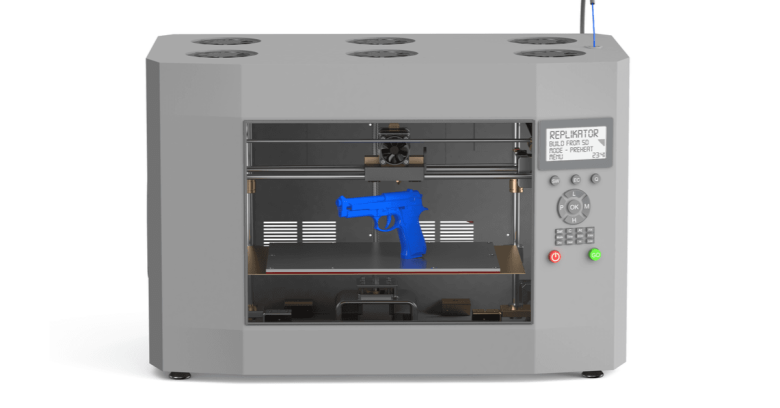 A coalition of states is suing the Trump administration in an effort to stop it from making it easier for people to make 3D-printed guns.

Specifically, top law enforcement officials are trying to keep the administration from allowing people to post blueprints online to print what are sometimes called “ghost guns”: unregistered, untraceable firearms that are tough to detect, even with a metal detector.

The lawsuit was filed in Seattle on Thursday. The office for Washington state Attorney General Bob Ferguson said in an announcement that the lawsuit has been brought by attorneys general in 20 states and the District of Columbia.

Law enforcement officials have for years been trying to raise awareness of the dangers of 3D-printed ghost guns. One such was used by Eric McGinnis: a Dallas man who was arrested in 2017 after police heard him shooting rounds in the woods.

McGinnis had tried to buy a gun but failed the background check after attacking his girlfriend the year before. When police searched him, they found a partially 3D-printed rifle, along with a hit list that included the names of federal lawmakers.

These things aren’t all plastic

A word about that “partially printed” 3D rifle: the notion of 3D printing will likely conjure images of an end product made entirely from printed plastic. However, most things aren’t made from a single material, and in the case of printed guns, that means printed plastic parts that are joined with essential metal components.

In other words, 3D printed parts don’t need to be the end product: they can, rather, assist in the fabrication of the end product – for example, besides the plastic bits of a printed gun, 3D printing can also assist in rifling the metal barrels.

Thursday’s lawsuit isn’t the first go-round when it comes to suing the government over the sharing of 3D-printed gun plans online. In July 2018, Ferguson led a similar multi-state lawsuit, suing the administration for ”giving dangerous individuals access to 3D printed firearms.”

Why is the Trump Administration working so hard to allow domestic abusers, felons and terrorists access to untraceable, undetectable 3D-printed guns?

Even the president himself said in a tweet that this decision didn’t make any sense – one of the rare instances when I agreed with him. We will continue to stand up against this unlawful, dangerous policy.

Proponents of the administration’s attempts say that it’s citizens’ constitutional right to get at 3D gun blueprints. Hampering the posting of such content would violate the First Amendment protection of freedom of expression, they claim, as well as the Second Amendment’s protection of Americans’ right to keep and bear arms.

Here’s a timeline for the current suit’s genesis and for what the attorneys general say have been contradictory stances taken by the administration:

2015: a gun-file distributor sues Obama administration. In June 2015, the State Department made it plain that it intended to regulate Americans’ publishing of online data that could enable someone to digitally fabricate a gun.

Defense Distributed, a global distributor of open-source, downloadable 3D-printed gun files, sued after the Department of State forced it to remove files from the internet. At the time, the federal government successfully argued that posting the files online violates firearm export laws and poses a serious threat to national security and public safety. The Supreme Court declined to hear the case.

2018: the government flip-flops. The Trump administration reversed the government’s stance and settled the Defense Distributed case, agreeing to allow unlimited public internet distribution of the downloadable files. A state coalition filed a lawsuit in July 2018. The government lost the case after the Seattle judge said that the administration’s decision to allow the distribution of the files was “arbitrary, capricious and unlawful.”

2019: 2nd try. The administration is now trying again, this time by publishing new rules that would transfer regulation of 3D-printed guns from the State Department to the Department of Commerce. The new rules were made available to the public the week prior to the new lawsuit and were finalized on Thursday, the day the suit was filed.

The states are claiming in this second lawsuit that regulatory change would effectively allow for unlimited distribution of the guns.

The administration itself has admitted that regulating ghost guns is legal. The Department of Commerce acknowledged in the rules that regulation doesn’t violate the First or Second Amendments:

The government also acknowledged the dangers posed by the distribution of 3D-printed gun blueprints in the new rules:

Such items could be easily used in the proliferation of conventional weapons, the acquisition of destabilizing numbers of such weapons, or for acts of terrorism. […] The potential for the ease of access to the software and technology, undetectable means of production, and potential to inflict harm on U.S. persons and allies abroad present a grave concern for the United States.

The Justice Department hasn’t commented on the suit.