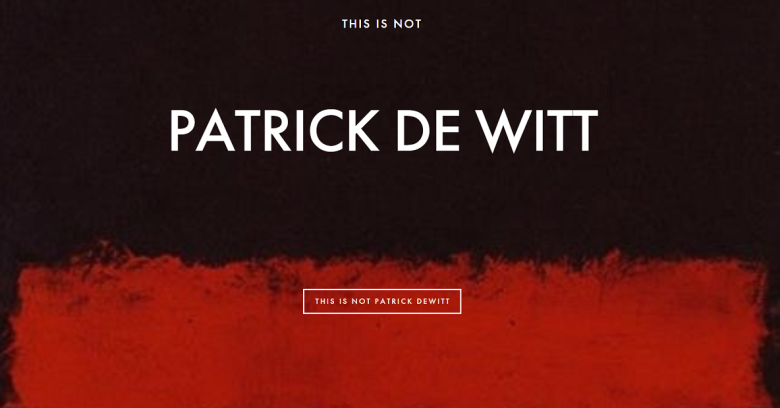 If you visit the website of renowned Canadian novelist Patrick deWitt today, you’ll see a surprising message. “THIS IS NOT PATRICK DEWITT”, it says.

That’s because the domain has been taken over by a cybersquatter. Not just any cybersquatter, mind – this one has literary ambitions.

The unpublished writer apparently noticed that deWitt had let the domain lapse, and decided to register it for themselves. Clicking on the page takes you to an about section, which announces:

Patrick deWitt is an award-winning author who has written 4 best-selling novels.

This is not his site.

I have not made any films. I have not written any award-winning books.

If you want to do something that is singularly unrewarding, write a novel.

Anyway, Patrick deWitt wasn’t using this site, so rather than waste your time with a blank page, I thought I would join you here and we could share a moment.

As if that wasn’t cheeky enough, the sneaky scribe has also posted their own manuscript on the site. Called In God’s Silence, Them Devils Sang, the author describes it as an acid western.

The news hit the internet last week, but this has been going on for a while. The first instance of the cybersquatter’s site shows up on the Wayback Machine (a site that archives snapshots of web pages) on 10 November 2018.

The cybersquatter also seems to have toned down the cockiness following the online attention. As recently as 12 January this year, the site contained a slightly longer message, adding the following to the about section:

PS. Mr deWitt, If you want the site back, just let me know. I’m not trying to blackmail you, your producers, the publishing house or your literary agent. I just want y’all to read my manuscript.

Oh f[*]ck, I just realized that’s the dictionary definition of blackmail. Sorry, I guess I just meant I don’t really give a f[*]ck about money.

As of yesterday, the current version of the site also features a different piece of writing altogether: a first-person account of life as a captive orca. From acid western to Free Willy.

deWitt is a self-proclaimed internet hermit. Not because he’s sniffy about popular culture in any way, but rather because he finds it too addictive. In a 2015 Buzzfeed interview, he said that he loves distracting media so much that he had to turn his back on it so that he could concentrate. That apparently included letting his domain go.

His legitimate site last showed up on the Wayback Machine on 24 November 2014, publicising his novel The Sisters Brothers. By 17 December 2014 it had been replaced with an error message explaining that the site couldn’t be displayed. That message stuck around for years, interspersed with the occasional parked site page.

Things could have been a lot worse for deWitt. Having your site cybersquatted isn’t ideal, but at least the perp is being upfront about it and not trying to pass himself off as the award-winning author. Even if you don’t plan on maintaining a website that has carried your image or work at some point in time, it pays to keep the domain handy to protect your reputation (not to mention any email addresses that may have been associated with it).