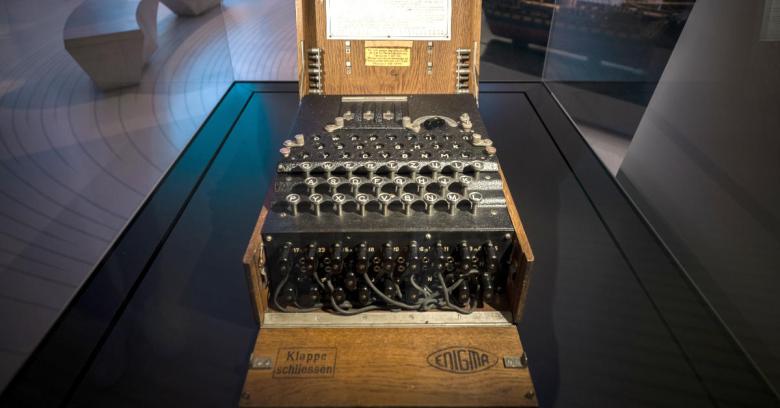 A ghost net is any rogue fishing device (often a gill net, dragged behind fishing vessels to snare fish by the gills in large numbers) that has got loose and carries on snagging sea creatures, including fish, sea mammals such as whales and dolphins, and even birds, in an uncontrollable way.

Gill nets that have sunk typically get caught up on objects on the sea floor, almost as though they’d been installed permanently on purpose, where they may continue to harm sea life for years.

As you might imagine, and as the WWF notes, it’s usually substantial objects such as rocks or submerged tree trunks that snag ghost nets, but occasionally they get caught up on unusual items…

…such as a recently-recovered rogue net in Gelting Bay, which opens into Flensburg Fjord in the Baltic Sea, between Germany and Denmark.

That ghost net turned out to be held in place by an Engima cipher machine from World War II.

Unsurprisingly, the encryption machine was in a pretty poor state, after at least 75 years in seawater, but is nevertheless recognisable to anyone who has seen an Enigma before – or a picture of one, because there aren’t many left these days:

According to lead diver Florian Huber, one of his colleagues surfaced from a dive and reported “an old typewriter” in a net they were working on, which immediately suggested a naval cipher machine.

That’s because the Nazis ordered the German Navy to scuttle its submarines immediately before surrendering to the Allies at the end of the war, and nearly 50 submarines were in Gelting Bay, a well-sheltered natural harbour, at the time.

Intriguingly, the Allies were aware that the German Navy had already started sinking submarines to prevent them being captured when hostilities ceased, so the Allies ultimately insisted that the Navy’s vessels be surrendered intact.

As a result, the secret signal to commence the scuttling operation – the transmission of the prearranged code word Rainbow – was countermanded just minutes after being issued.

No one in Gelting Bay, it seems, was listening by that time, and more than 40 submarines went to the bottom anyway.

As Florian Huber wryly remarked, “We assume our Enigma went overboard in the course of events.”

The corroded device has been handed to the State Archaeological Office in Schleswig-Holstein, where experts hope to restore it – but it will be a long process.

Apparently, it will need to go back underwater for another year, this time in distilled water, which will gradually and gently flush out the corrosive salts that have built up on the machine.

Presumably, the use of more aggressive descaling and “de-corrosion” techniques would ruin what’s left of the device.