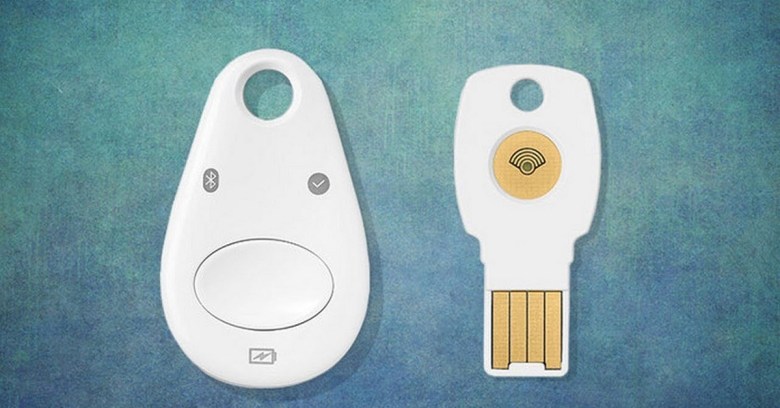 In July 2018, after many years of using Yubico security key products for two-factor authentication (2FA), Google announced that it was entering the market as a competitor with a product of its own, called Google Titan.

Security keys of this sort are often known as FIDO keys after the Fast IDentity Online Alliance, which curates the technical specifications of a range of authentication technologies that “[p]romote the development of, use of, and compliance with standards for authentication and device attestation”.

The Google Titan device, like similar products from Swedish company Yubico and Chinese company Feitian (which actually makes the hardware used in the Titan), looks like a miniature key fob that contains specialised and supposedly tamper-proof hardware for performing secure cryptographic calculations.

Much like the chip on your credit card (in fact, Titan keys use the same secure processor as some smart cards), or the SIM card in your phone, Titans are designed to do encryption in a rather special way.

Titans can generate encryption keys internally, can encrypt (or digitally sign) data that you send to them, and can export the encrypted (or signed) data.

But they cannot export the secret part of the key itself, which is locked up inside the chip.

As you can probably imagine, this makes it possible to implement a secure login process where:

Simply put, the fact that the key itself not only generates but also securely stores its own cryptographic secrets means that it can’t, in theory at least, be cloned or copied.

Titan keys use a choice of USB (you plug them briefly into a USB port), NFC (you wave them near an NFC-enabled device such as a phone) or Bluetooth (same idea as NFC). Because they can’t be tricked into spitting out your secret cryptographic keys, they can’t be skimmed or plundered for their data even if you connect them up to a computer or a phone that is itself infected with malware.

Of course, all this anti-cloning protection relies on two vital assumptions, namely that the Titan key really is clone-proof, and that its private internal data can’t be extracted by an attacker.

That assumption has just been disproved.

In this admittedly very technical paper (strong mathematics required), they explain how they bypassed Titan’s anti-clone protection and figured out a way to extract secret data from the device.

In particular, Titan keys provide support for a public-key encryption algorithm called ECDSA (Elliptic Curve Digital Signature Algorithm), where the device itself generates a public-private keypair, exports the public key only, and keeps the private key inside the device where you aren’t supposed to be able to get at it.

Amazingly, the researchers came up with a technique, admittedly not an easy or a quick one, by which they could use electromagnetic emanations – tiny, stray radio waves emitted by the device as a side-effect of the electrons whizzing around inside it as it operates – to make guesses about the internal state of the Titan processor chip while it was performing cryptographic calculations.

In particular, they figured out how to monitor the chip while it was performing authentication operations, something that the device is designed to do whenever requested.

From the combined electromagnetic emissions of several thousand cryptographic calculations, they were able to infer the private key that was used in the process.

Interestingly, their electromagnetic snooping didn’t reveal the bits of the private key directly.

Instead, they were able to guess at the value of some of the bits of a random number, known as a nonce (number used once), generated and used internally in a multiplication operation every time a digital signature was calculated.

Multiplication algorithms are notoriously difficult to program in such a way that they behave consistently no matter what numbers are being multiplied.

Knowing the random nonce, which is deliberately thrown away after each digital signature is completed, is enough to extract the private key, given that you already know the input data, the public key and the output data.

You can see the “complexity of consistent multiplication” problem in action if you ask someone to multiply without a calculator. They’ll come up with the answer to 312×100 right away; 312×101 will take a bit longer but they should be able to do it in their head; but ask them for 312×456 and they will almost certainly reach for pen and paper and take many times longer to get the answer. Ensuring that your multiplication algorithm does exactly the same amount of work, in an indistinguishable way, regardless of whether the calculation is “easy” or “difficult”, is surprisingly hard.

How bad is the attack?

After sampling thousands of digital signature operations, involving thousands of nonces, they had enough information about the internal state of each ECDSA computation to work backwards to the private key.

That’s the bad news: it proves that if attackers can get their hands on your Titan key for a while, and connect it to a monitoring device of their own for long enough, they can extract the current ECDSA private key and use it to make a software clone of your Titan key.

The crooks could then snoop on you after returning the original key to you, because if you don’t realise you’ve been hacked, you’ll probably keep logging in as usual.

The chip inside the Titans turned out not to be tamper proof, and not to be sufficiently protected against electromagnetic snooping.

That combination led to what’s known as a side channel attack, so-called because it relies on measuring various side effects of the calculations performed, rather than tracking the calculations directly.

Firstly, you need about $10,000 of specialist equipment, carefully set up to perform pinpoint radio measurements:

If we zoom into the picture of the snooping rig, you can see both the electromagnetic probe (the metal spike emerging from the red-and-gold box) and the precision positioning device (the black slab labelled “Thorlabs”):

The Langer ICR HH 500-6 electromagnetic probe has a detection coil that is just half a millimetre in diameter and can pinpoint radio emissions between 2GHz and 6Hz.

The Thorlabs PT3/M 3-axis (X-Y-Z) manual micro-manipulator can be positioned to within one-hundredth of a millimetre (10 micrometres, or just 4/10,000ths of an inch).

Secondly, you need to open up the Titan key, which the researchers found easy to do, but not in a way that would escape notice when the device was reassembled and returned to the original owner in the hope they would not notice it had been “borrowed”.

The researchers couldn’t find a way to open up the device with a scalpel or other fine cutter without destroying it, unless they softened up the plastic first with a heat gun, leaving rather obvious signs of tampering:

Thirdly, you need a corrosive chemical that will dissolve the plastic coating on the secure chip inside the device, without overdoing it and destroying the chip (or your lungs) completely.

Fourthly, you need to perform about 6000 digital signature calculations inside the chip in order to collect enough data for later, which takes about six hours given the processing speed of the device.

(The rest of the work, going backwards from the snooped data to the hidden private key, requires a panoply of statistical calculations and deep learning computations, but can be done “offline”, after you’ve returned the reassembled Titan key to its rightful owner in the hope they won’t have missed it and won’t notice that it now looks as though it was left on a car dashboard in direct sunlight.)

Note that anyone who already has your username, password and Titan key can login as you anyway, because they have both factors of your 2FA, namely “what you know” (the password) and “what you have” (the Titan key).

Current Titan keys have no biometric protection to stop them being used by someone else, so stealing someone’s key is already a way into their account.

So this attack only makes sense for someone who wants to make a clone of your Titan key so that they can:

Fortunately, where a presumably well-funded adversary wants long-term access to your account to keep you under surveillance for some time, the FIDO authentication standard includes a way of detecting that your key has been cloned.

That’s because every authentication reponse that’s created by a FIDO key includes a count of how many responses the key has computed so far, together with a digital signature of that count.

Whenever the attackers login using the cloned key, they have to guess the current value of the counter in your key, add one, and use that to get in.

If they guess incorrectly, an online service that tracks the counter number of each user’s key would probably catch the crooks out before they got in at all.

If they guess correctly, however, then the counter in your key will be behind by one (or more) next time you login, and that also ought to raise the alarm.

So, the most obvious precautions against this hard-to-use attack are:

The paper includes a list of devices that the researchers either found to be vulnerable, or assume to be at risk because they use the same vulnerable chip (NXP A700X).

The full list is here, and includes: all Google Titan keys, Yubikey’s Neo product, and various Feitian devices including the MultiPass FIDO and ePass FIDO keys.