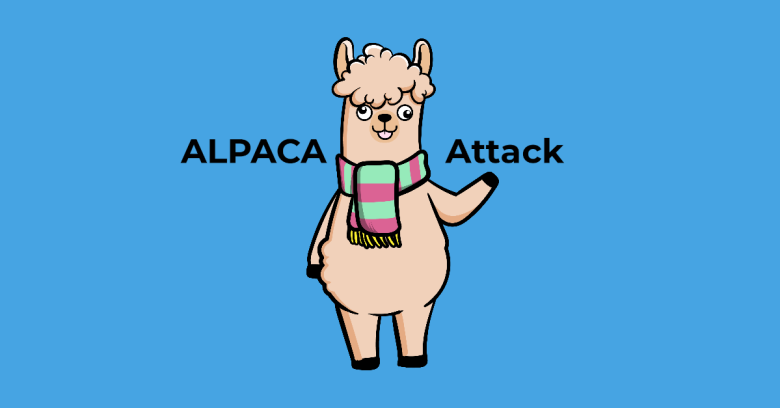 TLS, short for Transport Layer Security, is an important part of online cybersecurity these days.

TLS is the data protection protocol that puts the padlock in your browser’s address bar, keeps your email encrypted while it’s being sent (probably), and prevents cybercrooks from casually substituting the software you download with malware and other nasties.

The TLS protocol works by:

So, whenever a vulnerability is announced in TLS, given how much we rely on it, the announcement typically makes big headlines.

Amusingly, perhaps, that’s had a sort of circular effect, with researchers going out of their way to come up with names and logos for TLS vulnerabilities that encourage big headlines in the first place.

A real attack, but not too much of a danger

The good news is that ALPACA isn’t a terribly usable attack, and there are some fairly simple ways to ensure it doesn’t happen on your servers (and therefore, indirectly, to your visitors), so there isn’t a clear and present danger to online commerce because of it.

The bad news, of course, is that ALPACA is a vulnerability nevertheless, or more precisely a family of vulnerabilities, and it exists because we, as an internet community, haven’t been quite as careful or as precise as perhaps we should have been when setting up our servers to use TLS in the first place.

ALPACA is short for Application Layer Protocols Allowing Cross-Protocol Attacks (many BWAINs involve a bit of a linguistic stretch), and it gets that name because TLS connections aren’t tied to any specific application, but instead simply protect the data in a transaction, without any formal way to restrict that transaction to a specific application or purpose.

The researchers discovered that millions of network domains out there not only use TLS on multiple servers for multiple different purposes, such as securing both HTTP (web browsing) and SMTP (email transfer), but also often fail to keep the verification part of the TLS process separate for the different services they offer.

In other words, the same TLS certificate that they use to verify, say, their email server to other email servers would also work to verify their web server to visitors using a browser.

What that means – and bear with us, because this ends up sounding both complicated and unlikely at first glance – is that if a crook could redirect your browser from a company’s website to, say, one of its email (or secure FTP, or IMAP, or POP3) servers instead, then your browser might end up trusting that nearly-but-not-quite-right other server instead.

Sometimes, crooks can pull off traffic redirection inside your network even if they can’t hack into the servers themselves.

ALPACA attacks provide a method whereby that sort of traffic redirection could be used to subvert security, both inside and outside your network, rather than simply causing a disruption or denial of service, as you might assume at first.

The problem is that TLS secures the raw data that gets transported across the connection it’s protecting, and verifies the name of the server it’s been asked to connect to, but it doesn’t formally verify the actual application that’s running at each end of the link, or determine the validity of the data that’s being exchanged.

In other words, in an ALPACA attack, the padlock would show up in your browser, you’d be unaware that you weren’t actually connected to the server you expected, and your browser would innocently, and trustingly, start talking to another server in on the network instead.

At this point, you are probably thinking, “So what? Browsers talk HTTP, but email servers talk SMTP. The two are incompatible, so the browser will just get blasted with error messages and that will be the end of it.”

For example, web servers are (or ought to be!) super-cautious about how data that was included in your web request gets represented in the reply that’s sent back.

If you click a search link for a website, for instance, that includes a search parameter such as <script>alert('Ooops!')</script>, then it’s vitally important that the web server doesn’t send back a web page that includes exactly that text.

If the server sends back an error message that literally contains the message Sorry, the text <script>alert('Ooops!')</script> was not found, then it has just served up a web page, with the origin and authority of the server itself, that contains JavaScript decided by an untrusted outsider!

That’s known as XSS, or cross-site scripting (more precisely, it’s a reflective XSS, because the server simply reflects the chosen JavaScript right back into your browser where your browser magically trusts it and runs it).

In case you’re wondering, the parts of this web page above that appear to contain JavaScript tags don’t literally include the text you see on your screen. The web page contains HTML code that tells the browser to display JavaScript tags at the relevant places, without actually containing the raw tags themselves.

XSS is a huge web security hole, because the reflected script can access data such as login cookies specific to the site you’re currently visiting, and thereby steal your login, raid your shopping cart, or otherwise poke its nose into your online business.

Email servers, on the other hand, don’t generally deal with JavaScript, and their replies are supposed to make sense to email sending applications, so there’s a chance that aiming a browser at a mail server and sending a carefully crafted but fake web request…

…might cause the email server to produce, inamongst its output, an error message that hasn’t gone through the same scrupulous anti-XSS checking that would happen in a web server.

You’re probably once again thinking, “So what? If the email server sends back some rogue, reflected JavaScript, what harm would that do? There aren’t any session coookies, shopping carts or other private web data associated with the email server, so an attacker would get nowhere.”

Except for one thing: the browser thinks it’s connected to the real web server, and it made that decision because it was presented with a TLS certificate that would have been valid for the web server, if indeed that’s where it had ended up.

Therefore the rogue script reflected by the well-meaning email server would be able to read out the browser cookies and web data associated with the web server, even though the browser didn’t connect to the web server at all.

All of this raises the question: “But how could a browser mix up a web server’s TLS certificate with an email server’s certificate in the first place?”

Well, until certificate issuing companies like Let’s Encrypt came along and made the process of acquiring TLS certificates both free and straightforward, there was usually a fair bit of hassle (and cost) involved in buying and updating certificates for all the servers on your network.

As a result, companies understandably often rely on certificates that are valid for several, many, or even all the possible servers in their network domain.

Instead of getting a separate certificate for, say, www.example.com and mail.example.com, for example, you might choose to use what’s known as a wildcard certificate that’s valid for *.example.com, where the asterisk (star) character denotes “any name at all”, in the same way that most file-finding programs interpret *.DOCX as “all files that end with a DOCX extension”.

And that, very heavily simplified, is the essence of the ALPACA problem.

TLS certificates that are valid for more than one different type of server on your network could be used to perform the CA part of ALPACA, namely the Cross-protocol Attacks.

Your browser ends up trusting the wrong server, and talking to it in the wrong sort of language, but is nevertheless able to pull off some sort of harmful security bypass without directly hacking any of the servers themselves.

The researchers have identified several ways to reduce the risk of this sort TLS abuse, if you’re worried about visitors to your network being tricked by an admittedly-unlikely ALPACA attack.

Network programmers often invoke what’s known as the Robustness Principle, proposed by the late Jon Postel in the early, uncommercialised internet era: “TCP implementations should follow a general principle of robustness: be conservative in what you do, be liberal in what you accept from others.”

But that “rule” is dangerously out of date in the 2020s, because it encourages programmers to get security details right themselves, but to allow others to break the rules, quite possibly on purpose and with nefarious intent.

A better contemporary rule is: “Get it right yourself, and don’t let others get it wrong, accidentally or otherwise.”

The Postfix SMTP server, for example, actively (if not compliantly) watches out for SMTP input lines that look like the start of an HTTP request, rather than merely being mis-spelled commands, and closes the connection immediately if it thinks there’s a web browser at the other end:

Wildcard certificates are very commonly used, and are handy for administrators who look after dozens or hundreds of different subdomains on a business network.

Nevertheless, try to avoid wildcards if you can, and do your best to limit each certificate so that it only vouches for a list of server names that relate to a specific service or set of services.

For example, instead of acquiring a certificate for *.example.com that your web servers and SMTP servers can all use, consider getting one certificate for each type of server, and identifying the relevant servers specifially in each one:

Modern TLS versions support a feature called ALPN, where the client, such as your web browser, and the server you’re connecting to can specify which application protocols they would like to use over the connection, e.g. HTTP/1.1, HTTP/2 or FTP.

(Unfortunately, and perhaps surprisingly, the application type SMTP is not yet officially recognised [2021-06-11T14:00Z], but custom protocol strings can be used, and smtp can be used for email connections.)

Strictly enforcing ALPN is not currently practicable, because many legitimate programs that connect to your servers – older browsers, for example, or most email sending programs – either won’t be configured to use it, or won’t support it at all.

However, setting up your own servers to respect the requests of clients that do specify what sort of data they plan to exchange will help to immunise well-informed visitors against ALAPCA-style cross-protocol attacks.

Often, especially in the cloud, a single web server will be used to handle requests for many different domains, but will not be able (or will want to avoid) sharing a TLS certificate amongst all of them.

TLS therefore now allows the client to specify up front which service it plans to use on the server it’s connecting to, using a feature known as SNI.

The server typically uses the SNI information to decide which TLS certificate to send out to verify the connection that’s being made.

But you can also use SNI to ensure that you don’t accept connections that have arrived at your server by mistake, or through some sort of criminally-minded redirection.

Strictly enforcing SNI, so that visitors must make their intention clear in advance via SNI or else get kicked out, is unlikely to work well right now, because few companies that send you email are likely to be adding SNI data to their connection requests, and some browsers still don’t bother with SNI, either.

However, when visitors do declaring their intentions up front via SNI but nevertheless end at the wrong server anyway, blocking their request will to protect both you and them from ALPACA-like tricks.