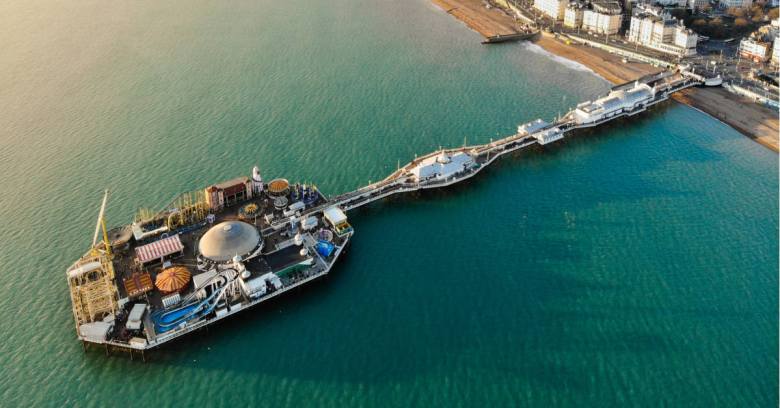 British seaside resorts are famous for their piers, walkways that stretch out over the sea so that visitors can get the feeling of being “at sea” without actually boarding a boat and risking sea-sickness, and without even having to set foot on the shingles/gravel/mudflats/sand of the beach at all.

In their Victorian heyday, piers were quite the tourist attraction, featuring shops, fairground rides and even theatres suspended over the water, but the mixture of steel supports, corrosive seawater, winter storms, wooden decking and mains electricity made them prone to fires and collapse.

Nevertheless, those that survived and have been restored to their former glory have been enjoying a renaissance in popularity in recent years… at least until coronavirus lockdown.

Fortunately for the operators of the Palace Pier in Brighton, England, a relaxation in English lockdown rules from early April 2021 meant that visitors could return.

They brought their coronavirus-friendly credit cards with them to pay for admission fees, rides and – of course – the fairground staple known variously around the world as candy floss, cotton candy, ghost breath, fairy floss, Daddy’s beard and no doubt many other names that disguise the marketing-unfriendly fact that it is, in fact, 100% refined sugar.

English piers aren’t particularly cheap to visit – they do require a lot of maintenance, after all, as the numerous ruined examples around the British coast will remind you – but a trip to one, even for the whole family, certainly isn’t supposed to cost thousands of pounds.

However, as reporters from the UK’s Guardian newspaper report, a few unlucky visitors who went to the Palace Pier shortly after lockdown restrictions lifted did indeed end up getting charged that much.

Intriguingly, the people affected by this SNAFU somehow didn’t get charged for their April 2021 visit back in April 2021, as you might expect.

Apparently, their payments were only put through two months later by the processor WorldPay, at the end of June 2021.

Unfortunately, the delay also brought with it another glitch, namely that the batch of payments put through were billed using the date as the amount.

In a small mercy, Worldpay seems to have gone with the rather Y2K-unfriendly date format YYMMDD rather than the more robust and reliable YYYYMMDD, or else she might have ended up paying £202,104.08.

The good news is that now the reason for the miscalculations is known, the batch of defective transactions has been identified.

As a result, anyone affected in this incident ought to receive a refund, although they may, of course, end up with their card frozen or overdrawn in the interim, which could have a knock-on effect on other payments.

By they way, the Bank of England’s £50 banknote, featuring perhaps the most famous computer scientist of all time, Alan Turing, officially went into circulation this week.

So all English banknotes are now made of polymer, and can be cleaned with a sanitiser spray if you’re worried about infection.