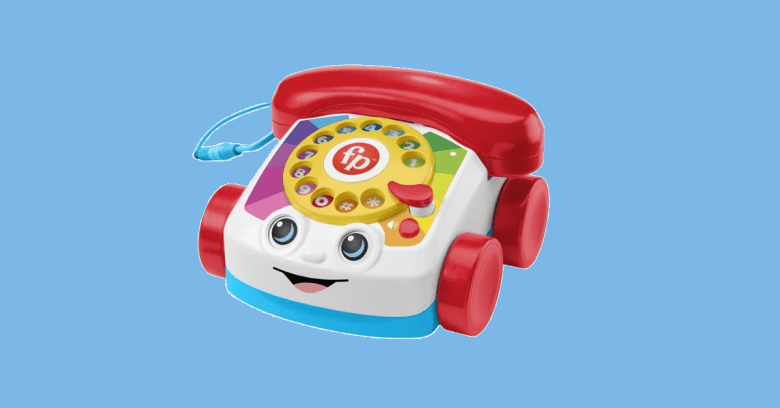 The picture you see above is not only a real Fisher-Price product, released in the second decade of the 21st century…

…but is also officially NOT A TOY!

Sure, it looks like a Chatter Phone toy, with an external appearance that adults of all ages will recognise, perhaps from having had one, played with one, or at least seen one in the toy store all those years ago.

Even when the mobile phone age arrived, the Chatter Phone retained its dial (an actual dial-shaped dial!), its cheese-dish phone styling, and its sideways receiver.

Fascinatingly, “keeping it retro” has been part of telephony ever since the second generation of telephone instruments came out in the century before last.

We carried on referring to the combined mouthpiece-and-loudspeaker component as a “receiver”, and we talked about “replacing the receiver”, long after the receiver ceased to be a separate item that contained just a loudspeaker. (Originally, only the receiver could be lifted up and replaced, because the mouthpiece – the sender – was typically built into the body of the instrument itself.)

And we kept on putting the receiver “back on the hook” to end a call long after phones had either receivers or hooks.

To this day – in fact, in this era of outsourced phone support and faraway call centres, perhaps more so than ever – we “continue to hold” even though Bluetooth headsets mean there is nothing to hold onto any more, and we still “dial” calls, although we now use a “keypad” to do so.

Of course, not only is it no longer a dial, it’s not even a keypad these days: it’s usually a touch screen with no actual keys or buttons at all.

The only thing that didn’t catch on in telephony, and perhaps we can all be thankful for this, is Alexander Graham Bell’s preferred telephonic greeting of “Ahoy!” – though for all we know a future generation of pirate-talking techies might revive this ancient rite.

This is NOT A TOY

Back to the Fisher-Price “NOT A TOY” Chatter Telephone with Bluetooth.

They’re not really for children, which is just as well because retro-loving adults seem to have bought them all up. ($60 at Best Buy, out of stock at our closest US store, which turns out to be 4900km away from Oxfordshire, in Bangor, Maine.)

In fact, if you’re a techie and you hadn’t heard of this product before, we suspect you secretly want one now, because [a] childhood memories, [b] ultimate happy/hippie/retro look, [c] the dial actually works, so you can actually dial calls, with an actual dial!

But you know where this is going, and you can probably guess who took it there – our chums Pen Test Partners (PTP), just down the road (or not far along the old railway line that’s currently being rebuilt) in Buckinghamshire, the next county over.

PTP wanted one of these phones, just like you do, but their closest Best Buy is also in Maine, so they decided to ask a friend in North America to order one (even he had to wait six weeks!), and conducted their research remotely.

The Chatter Telephone with Bluetooth is elegantly simple : the device is basically a bluetooth “headset”, with the added ability to accept numeric input (plus the all-important hash/pound and star symbols) via the rotary dial.

We don’t how how or if you can dial the plus symbol for overseas calls, but many countries let you use a special digit sequence instead.

So, the Chatter Telephone doesn’t take a SIM card itself; instead, it pairs with a regular mobile phone and acts, if you like, as a sort of extension – a happy, smiley, cheerful, brightly coloured, child-like extension phone with an actual rotary dial.

But despite its minimalistic functionality, PTP found that there had nevertheless been plenty of room for Fisher-Price to leave out the sort of cybersecurity features you might have expected.

(Try telling your kids that the Chatter Phone is NOT A TOY, even though it looks exactly like the one that Grandma dug out of the attic that IS A TOY.)

As PTP points out, the pairing-is-just-too-easy problem could be solved simply by adding a “press to pair” button on the phone itself, so that you would need physical access to the Chatter Phone to initiate a connection with it.

That way, the Chatter Phone wouldn’t be able to hook up unintentionally with a stranger just because its currently paired phone went out of range (or ran out of battery, or had Bluetooth turned off).

And a simple timeout to shut down the Chatter Phone if the receiver remained “open-circuit” when it was neither making nor receiving a call would surely help with the other flaws.

If the Chatter Phone shut off its audio connection automatically when it obviously wasn’t in use, and would only re-activate if the receiver were deliberately placed back on the hook and then lifted up again, you’d probably feel much safer against accidental (or deliberate) audio eavesdropping.

If you’ve already bought one of these funky NOT A TOYs, try to remember to turn it off when you aren’t actually using it.

Although that defeats the purpose slightly, we suspect that you won’t want to make or take all your calls on the Chatter Phone (it may not actually be a toy, but it certainly looks like one, and we can’t help but assume that the voice quality makes it sound like one).

So, turning it on only when you want to re-live your childhood…

…seems like a simple precaution, at least until Fisher-Price puts out a firmware update, assuming that there’s a way to update it.