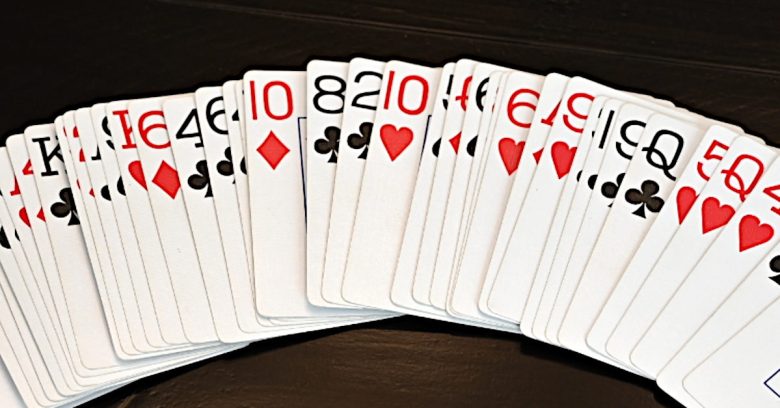 Cryptoguru Bruce Schneier (where crypto means cryptography, not the other thing!) just published an intriguing note on his blog entitled On the Randomness of Automatic Card Shufflers.

If you’ve ever been to a casino, at least one in Nevada, you’ll know that the blackjack tables don’t take chances with customers known in the trade as card counters.

That term is used to refer to players who have trained their memories to the point that they can keep close track of the cards played so far in a hand, which gives them a theoretical advantage over the house when predicting whether to stand or hit as play progresses.

Card counters can acquire an advantage even if all they do is keep track of the ratio of 10-cards (Ten, Jack, Queen and King) to non-10s left in the dealer’s shoe.

If you can balance the probabilities in your head in real time, then you may be able modify your bets accordingly and come out ahead in the long run.

Don’t actually try this, at least in Nevada: the casino is likely to catch you out pretty quickly, because your pattern of play will diverge notably from the most informed winning choices available if you aren’t counting cards. You might not end up in court, but you will almost certainly get escorted off the premises, and never let back in again.

To reduce the counterbalance of probabilities that card counters enjoy (those who haven’t been caught yet, at least), the casinos typically:

That immediately raises the question posed by Schneier: just how well-shuffled are the cards when they emerge from the machine?

Could you “guess” the next card out of the shoe better than chance suggests?

A fully electronic randomiser is limited in its complexity mainly by the speed of the CPU that it uses, which is typically measured in hundreds of millions or billions of arithmetical operations a second.

But an electromechanical card shuffler literally has to move the cards around in real life.

There’s obviously a limit to how quickly it can perform pack splits, card swaps and interleaving operations before the speed of the mechanism starts to damage the cards, which means that there’s a limit to how much randomness (or, more precisely, pseudorandomness) the machine can introduce before it’s time to play the next hand.

Shuffle for too short a time, and the casino might actually make things easier for card counters, if there’s a known bias in the distribution of the cards right from the start.

Shuffle for too long, and play will be too slow, so that players will get bored and wander off, something that casinos desperately try to avoid.

Schneier’s blog posts links to a fascinating piece by the BBC that describes how a mathematician/magician called Persi Diaconis of Stanford University, together with Jason Fulman and Susan Holmes, conducted a formal investigation into this very issue earlier this century, in a paper entitled simply: ANALYSIS OF CASINO SHELF SHUFFLING MACHINES.

Clearly, there are some shuffling techniques that don’t mix the cards up much at all, such as simply cutting the pack into two parts and moving the bottom part to the top.

Other techniques result in (or feel as though they should result in) to better mixing, for example the riffle shuffle, where you split the pack roughly in half, hold one half in each hand, and “flip” the two halves together, interleaving them in a pseudorandom way that alternates between taking a few cards from one side, then a few cards from the other.

Intriguingly, however, when skilled human shufflers are involved, none of those assumptions of unpredictability are safe.

Dextrous magicians and crooked dealers (Diaconis himself is the former, but not the latter) can perform what are known as faro shuffles, or perfect shuffles, where they do both of the following things every time they riffle the pack:

Diaconis himself can do perfect shuffles (including the rare skill of doing so with just one hand to hold both halves of the pack!), and according to the BBC:

[He] likes to demonstrate the perfect shuffle by taking a new deck of cards and writing the word RANDOM in thick black marker on one side. As he performs his sleight of hand with the cards, the letters get mixed up, appearing now and then in ghostly form, like an imperfectly tuned image on an old TV set. Then, after he does the eighth and final shuffle, the word rematerialises on the side of the deck. The cards are in their exact original sequence, from the Ace of Spades to the Ace of Hearts.

In fact, there are two sorts of perfect shuffle, depending on which hand you start riffling from after cutting the cards into two 26-card piles.

The former type is called an out-shuffle, and reorders the pack every eight times you repeat it, as you can see here (the image has 52 lines of pixels, each line corresponding to the edge of one card with the word RANDOM written on it with a marker pen):

The latter type is an in-shuffle, and this, amazingly, takes 52 re-shuffles before it repeats, though you can see clearly here that the pack never really shows any true randomness, and even passes through a perfect reversal half way through:

What did the mathematicians say?

So, back in 2013, when Diaconis el al. studied the shelf shuffler machine at the manufacturer's invitation, what did they find?

As the paper explains it, a shelf shuffler is an electromechanical attempt to devise an automated, randomised "multi-cut multi-riffle shuffle", ideally so that the cards only needs to be worked through once, to keep shuffling time short.

The cards in a shelf shuffler are rapidly "dealt out" pseudorandomly, one at a time, onto one of N metal shelves inside the device (whence the name), and each time a card is added to a shelf it's either slid in at the bottom, or dropped on the top of previous cards. (We assume that trying to poke the card in between two random cards already in the stack would be both slower and prone to damage the cards.)

After all cards have been assigned to a shelf, so that each shelf has about 1/Nth of the cards on it, the cards are reassembled into a single pile in a pseudorandom order.

Intuitively, given the pseudorandomness involved, you'd expect that additional re-shuffles would improve the overall randomness, up to a point…

…but in this case, where the machine had 10 shelves, the researchers were specifically asked, “Will one pass of the machine be sufficient to produce adequate randomness?”

Presumably, the company wanted to avoid running the machine through multiple cycles in order to keep the players happy and the game flowing well, and the engineers who had designed the device had not detected any obviously expoitable statistical anomalies during their own tests.

But the company wanted to make sure that it hadn’t passed its own tests simply because the tests suited the machine, which would give them a false sense of security.

Ultimately, the researchers found not only that the randomness was rather poor, but also that they were able to quantify exactly how poor it was, and thus to devise alternative tests that convincingly revealed the lack of randomness.

In particular, they showed that just one pass of the device left sufficiently many short sequences of cards in the shuffled output that they could reliably predict between 9 and 10 cards on average when a pack of 52 shuffled cards was dealt out afterwards.

As the researchers wrote:

The president of the company responded, “We are not pleased with your conclusions, but we believe them and that’s what we hired you for.” We suggested a simple alternative: use the machine twice. This results in a shuffle equivalent to a 200-shelf machine. Our mathematical analysis and further tests, not reported here, show that this is adequately random.

This tale contains several “teachable moments”, and you’d be wise to learn from them, whether you’re programmer or product manager wrestling specifically with randomess yourself, or a SecOps/DevOps/IT/cybersecurity professional who’s involved in cybersecurity assurance in general:

Short of time or expertise to take care of cybersecurity threat response? Worried that cybersecurity will end up distracting you from all the other things you need to do?

12 comments on “Serious Security: How randomly (or not) can you shuffle cards?”