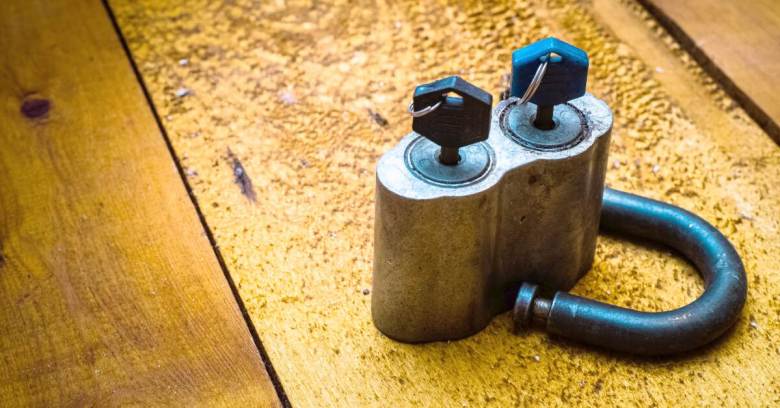 A bug bounty hunter called David Schütz has just published a detailed report describing how he crossed swords with Google for several months over what he considered a dangerous Android security hole.

According to Schütz, he stumbled on a total Android lockscreen bypass bug entirely by accident in June 2022, under real-life conditions that could easily have happened to anyone.

In other words, it was reasonable to assume that other people might find out about the flaw without deliberately setting out to look for bugs, making its discovery and public disclosure (or private abuse) as a zero-day hole much more likely than usual.

Unfortunately, it didn’t get patched until November 2022, which is why he’s only disclosed it now.

Simply put, he found the bug because he forgot to turn off or to charge his phone before setting off on a lengthy journey, leaving the device to run low on juice unnoticed while he was on the road.

According to Schütz, he was rushing to send some messages after getting home (we’re guessing he’d been on a plane) with the tiny amount of power still left in the battery…

…when the phone died.

We’ve all been there, scrabbling for a charger or a backup battery pack to get the phone rebooted to let people know we have arrived safely, are waiting at baggage reclaim, have reached the train station, expect to get home in 45 minutes, could stop at the shops if anyone urgently needs anything, or whatever we’ve got to say.

And we’ve all struggled with passwords and PINs when we’re in a rush, especially if they’re codes that we rarely use and never developed “muscle memory” for typing in.

In Schütz’s case, it was the humble PIN on his SIM card that stumped him, and because SIM PINs can be as short as four digits, they’re protected by a hardware lockout that limits you to three guesses at most. (We’ve been there, done that, locked ourselves out.)

After that, you need to enter a 10-digit “master PIN” known as the PUK, short for personal unblocking key, which is usually printed inside the packaging in which the SIM gets sold, which makes it largely tamper-proof.

And to protect against PUK guessing attacks, the SIM automatically fries itself after 10 wrong attempts, and needs to be replaced, which typically means fronting up to a mobile phone shop with identification.

What did I do with that packaging?

Fortunately, because he wouldn’t have found the bug without it, Schütz located the original SIM packaging stashed somewhere in a cupboard, scratched off the protective strip that obscures the PUK, and typed it in.

At this point, given that he was in the process of starting up the phone after it ran out of power, he should have seen the phone’s lockscreen demanding him to type in the phone’s unlock code…

…but, instead, he realised he was at the wrong sort of lockscreen, because it was offering him a chance to unlock the device using only his fingerprint.

That’s only supposed to happen if your phone locks while in regular use, and isn’t supposed to happen after a power-off-and-reboot, when a full passcode reauthentication (or one of those swipe-to-unlock “pattern codes”) should be enforced.

Is there really a “lock” in your lockscreen?

As you probably know from the many times we’ve written about lockscreen bugs over the years on Naked Security, the problem with the word “lock” in lockscreen is that it’s simply not a good metaphor to represent just how complex the code is that manages the process of “locking” and “unlocking” modern phones.

…but also has a letterbox (mail slot), glass panels to let in light, a cat flap, a loidable spring lock that you’ve learned to rely on because the deadbolt is a bit of a hassle, and an external wireless doorbell/security camera that’s easy to steal even though it contains your Wi-Fi password in plaintext and the last 60 minutes of video footage it recorded.

Oh, and, in some cases, even a secure-looking front door will have the keys “hidden” under the doormat anyway, which is pretty much the situation that Schütz found himself in on his Android phone.

A map of twisty passageways

Modern phone lockscreens aren’t so much about locking your phone as restricting your apps to limited modes of operation.

This typically leaves you, and your apps, with lockscreen access to a plentiful array of “special case” features, such as activating the camera without unlokcking, or popping up a curated set of notification mesaages or email subject lines where anyone could see them without the passcode.

What Schütz had come across, in a perfectly unexceptionable sequence of operations, was a fault in what’s known in the jargon as the lockscreen state machine.

A state machine is a sort of graph, or map, of the conditions that a program can be in, along with the legal ways that the program can move from one state to another, such as a network connection switching from “listening” to “connected”, and then from “connected” to “verified”, or a phone screen switching from “locked” either to “unlockable with fingerprint” or to “unlockable but only with a passcode”.

As you can imagine, state machines for complex tasks quickly get complicated themselves, and the map of different legal paths from one state to another can end up full of twists, and turns…

…and, sometimes, exotic secret passageways that no one noticed during testing.

Indeed, Schütz was able to parlay his inadvertent PUK discovery into a generic lockscreen bypass by which anyone who picked up (or stole, or otherwise had brief access to) a locked Android device could trick it into the unlocked state armed with nothing more than a new SIM card of their own and a paper clip.

In case you’re wondering, the paper clip is to eject the SIM already in the phone so that you can insert the new SIM and trick the phone into the “I need to request the PIN for this new SIM for security reasons” state. Schütz admits that when he went to Google’s offices to demonstrate the hack, no one had a proper SIM ejector, so they first tried a needle, with which Schütz managed to stab himself, before succeeding with a borrowed earring. We suspect that poking the needle in point first didn’t work (it’s hard to hit the ejector pin with a tiny point) so he decided to risk using it point outwards while “being really careful”, thus turning a hacking attempt into a literal hack. (We’ve been there, done that, pronged ourselves in the fingertip.)

Gaming the system with a new SIM

Given that the attacker knows both the PIN and the PUK of the new SIM, they can deliberately get the PIN wrong three times and then immediately get the PUK right, thus deliberately forcing the lockscreen state machine into the insecure condition that Schütz discovered accidentally.

With the right timing, Schütz found that he could not only land on the fingerprint unlock page when it wasn’t supposed to appear, but also trick the phone into accepting the successful PUK unlock as a signal to dismiss the fingerprint screen and “validate” the entire unlock process as if he’d typed in the phone’s full lock code.

Unfortunately, much of Schütz’s article describes the length of time that Google took to react to and to fix this vulnerability, even after the company’s own engineers had decided that the bug was indeed repeatable and exploitable.

As Schütz himself put it:

This was the most impactful vulnerability that I have found yet, and it crossed a line for me where I really started to worry about the fix timeline and even just about keeping it as a “secret” myself. I might be overreacting, but I mean not so long ago the FBI was fighting with Apple for almost the same thing.

Given Google’s attitude to bug disclosures, with its own Project Zero team notoriously firm about the need to set strict disclosure times and stick to them, you might have expected the company to stick to its 90-days-plus-14-extra-in-special-cases rules.

But, according to Schütz, Google couldn’t manage it in this case.

Apparently, he’d agreed a date in October 2022 by which he planned to disclose the bug publicly, as he’s now done, which seems like plenty of time for a bug he discovered back in June 2022.

But Google missed that October deadline.

The patch for the flaw, designated bug number CVE-2022-20465, finally appeared in Android’s November 2022 security patches, dated 2022-11-05, with Google describing the fix as: “Do not dismiss keyguard after SIM PUK unlock.”

In technical terms, the bug was what’s known a race condition, where the part of the operating system that was watching the PUK entry process to keep track of the “is it safe to unlock the SIM now?” state ended up producing a success signal that trumped the code that was simultaneously keeping track of “is is safe to unlock the entire device?”

Still, Schütz is now significantly richer thanks to Google’s bug bounty payout (his report suggests that he was hoping for $100,000, but he had to settle for $70,000 in the end).

And he did hold off on disclosing the bug after the 15 October 2022 deadline, accepting that discretion is the sometimes better part of valour, saying:

I [was] too scared to actually put out the live bug and since the fix was less than a month away, it was not really worth it anyway. I decided to wait for the fix.

Check that your Android is up to date: Settings > Security > Security update > Check for update.

Note that when we visited the Security update screen, having not used our Pixel phone for a while, Android boldly proclaimed Your system is up to date, showing that it had checked automatically a minute or so earlier, but still telling us we were on the October 5, 2022 security update.

We forced a new update check manually and were immediately told Preparing system update…, followed by a short download, a lengthy preparatory stage, and then a reboot request.

After rebooting we had reached the November 5, 2022 patch level.

We then went back and did one more Check for update to confirm that there were no fixes still outstanding.

We used Settings > Security > Security update to get to the force-a-download page: 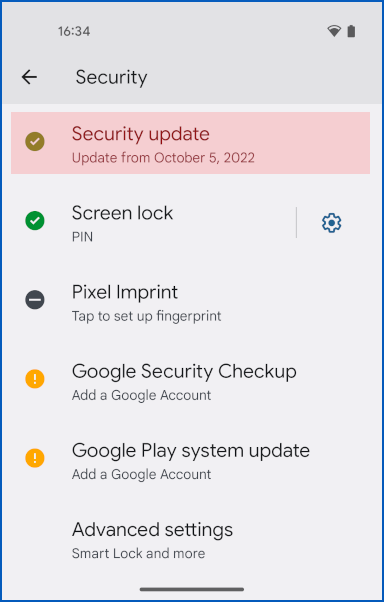 The date reported seemed wrong so we forced Android to Check for update anyway: 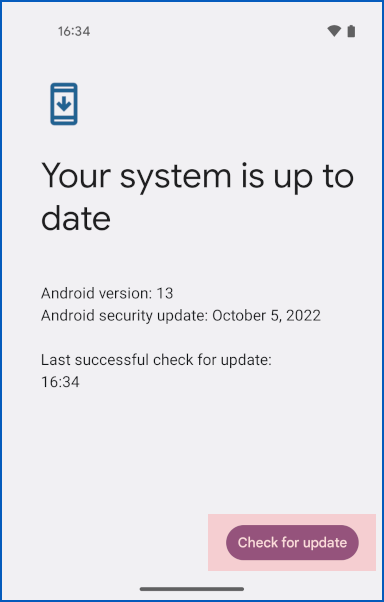 There was indeed an update to install: 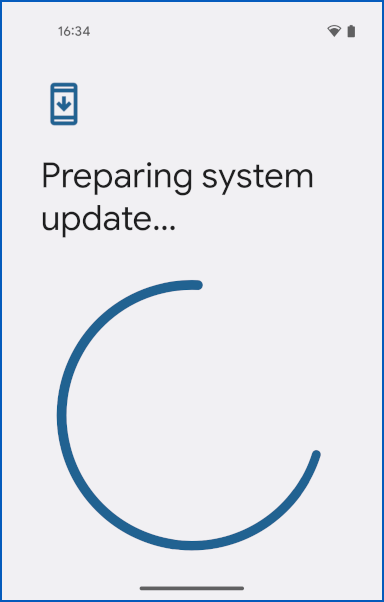 Instead of waiting we used Resume to proceed at once: 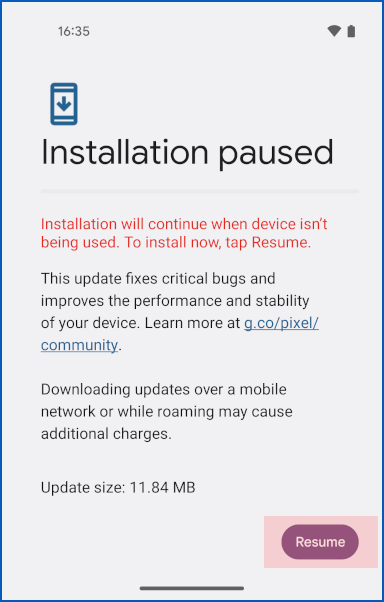 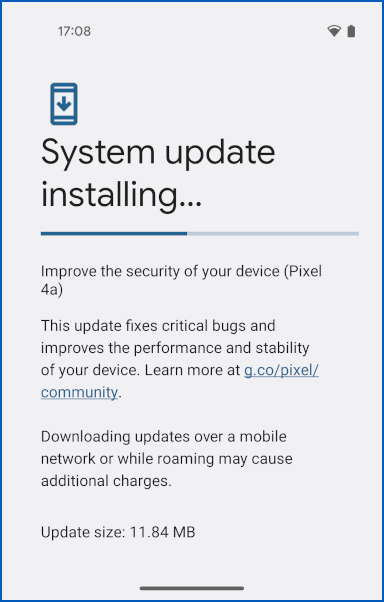 We did one more Check for update to confirm we were there: 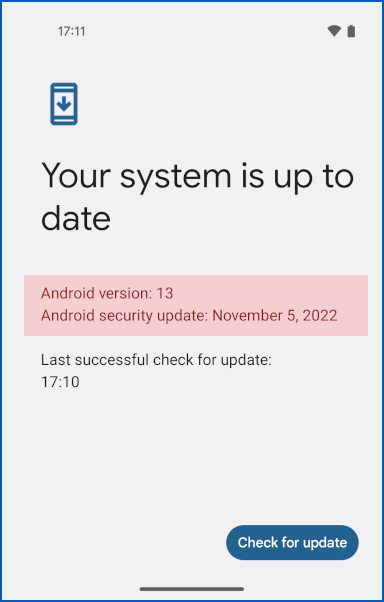