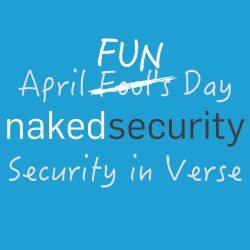 Our Security in Verse from April Fool’sFun Day, 2014.